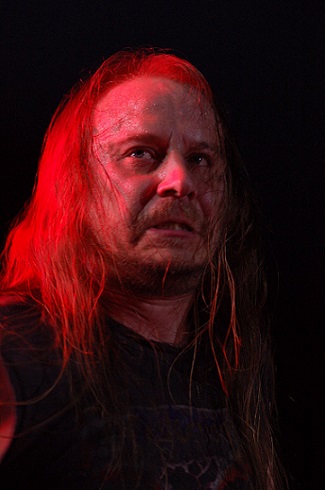 Being a humble music fan myself, I feel that I have lost a very dear person since a few days.. A person that has offered so much to me, to my friends, to so many people all over the world..
I know that many people feel that life is not fair, but I wish I could do something strong, something that could turn back time and make things different for someone like L-G.

This text is addressed to you, mainly because the need to do so derives from the fact that I owe you so many things throughout those years, so may good memories, moments, that I have felt so good. That have helped me to shape up myself, and that’s something that music always does to people.

But, this would have never been the case, at least to the extent that it happened, unless I Was influenced so much by this wonderful person, by L-G. He has been – by far from the second – my favorite voice, when it comes to the extreme metal sound, especially Death Metal. His voice, the toughness and tension. The brutality to deliver all those songs. The special and distinctive attitude from Day 1. The ‘Stockholm Sound’ in Death Metal from the late 80s has been marked so much with him behind the vocals. From the Nihilist years and the birth of that so much influential movement in the European Death Metal scene, until his days with his latter bandmates in Entombed AD. What a hell of a journey this has been! And it has not been an easy one of course..

‘Left Hand Path’ marks the beginning of Entombed’s LP career and one of the very first records that made an immediate and so serious impact all over heavy metal fans. From the very first seconds, L-G is putting things in place. As they should be. His growling along with the heavy riffing ‘baptized’ by Tomas Skogsberg in the legendary Sunlight Studios identifies a whole genre.
A whole era. Among the frenzy riffing, the solid strong drumbeats, and in a few cases the evil piano moments (which is repeated in a few Entombed records later on) L-G’s attitude in vocals is the trademark of the band. The soul of the band. He IS the voice the band.

Following a period when he is not active with Entombed, they release his favorite Entombed album ‘Clandestine’, a pure classic, and he releases a Split and an LP with Comecon, but he is back in action very very soon. That’s when Entombed release – to many fans their best one – ‘Wolverine Blues’. This record is an absolute killer from the first second to the last and he spits every single word like there is no tomorrow, taking absolutely no prisoners. This one has also his mark on it, especially adding to the unbeatable groove and headbanging desire, both in the faster ones but also to the doomier and slower ones (self-titled song or ‘Demon’). A new term is born, long live ‘Death N’ Roll’! Let people search for the second..! The throne is captured already!

Following this success, there comes a period with highs and lows, where someone could argue that the ‘lows’ (‘Same Difference’) have many interesting mid-tempo songs, where L-G reveals a less growling side of himself, but that same fact adds credit to his ability to slow down the pace and differentiate his style and personal way to deliver songs. ‘To Ride..’, ‘Uprising’, ‘Morning Star’ and also ‘Inferno’ are very diverse and uniquely placed among each other and his contribution (either singing or playing the piano in some cases) is fundamental. We are talking about a lot of Entombed classics here, from Motörhead/Rock N Roll influenced to Black Sabbath and more Death metal related. His trademark throughout his career is summarized in one word:

You can find so many death metal, thrash metal, black metal singers who can growl, who can sing with tension and live up to high standards. Absolutely agree.

There are very few who can give this absolute, unquestioned, undoubted feeling that there is no tomorrow, after each word, each chorus. And that attitude was presented on stage, where all and everybody are put under criticism. Live shows can really prove what a band or an artist are capable of. And L-G has repeatedly proved his status and stature as a performer so many times. His ability to self-criticize himself, to make jokes and have immediate contact and communication with the public, while singing and being HIMSELF is one of the very good reasons why people have always liked him and were pleased to meet with him or see him performing live.

Having the chance to meet him 5-6 times in person, I have realized that people who were with him throughout the years say that he was such a wonderful person, always with a good laugh, a positive attitude and a good heart.

A Djurgårdens IF child (his favorite team in Stockholm).

A Stockholm Original, as one of his friends called him.

Speaking about Stockholm, he was part of something unbelievable even by thinking of it: he played piano and sung along with Entombed in the Swedish Royal Opera in Stockholm, writing history I guess, because, there were very few cases of extreme metal bands that have tried the same thing in the early 00’s. How much progressive and broad-minded that can be? I wonder.. “Say it in Slugs” and “Chief Rebel Angel” in the Royal Opera.. Wow!

During the latter years, he has had success with the mighty Entombed AD with 3 very strong LPs and actually continuing where he left things from with Entombed. And this is a moment, dear Heavy Metal, where circumstances like this one, where you part ways with your ex band mates not in the best ways, put us fans in a difficult position to think about the past, and all those ‘what ifs’. But ‘Life goes on’ and people take decisions for their own reasons, which we will probably never find out..

Life sucks sometimes, and it feels worse when things go wrong to people whom we love, care about and have offered us so many good memories and moments to cherish and take forever in our hearts.. L-G has touched the lives of so many people in all corners of earth, being himself, authentic, charismatic and so emphatic, all the way..

The Music legacy lives on, it will never die.