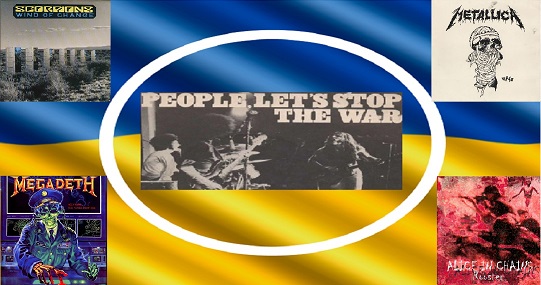 Metal music has always had meanings in its lyrics and sent messages to various recipients. It was and still is a revolutionary music genre, a music which helped the musicians and the fans to express their feelings, their attitude and culture, their dreams and inner desires. So, numerous metal artists have protested against war with their songs, some of which are classic. Metal sings also for peace, love, solidarity and prosperity in human life, metal stands against the pain of war. Οn the occasion of the war against Ukraine, we searched for some of the best anti-war metal songs of all times. Here is our top-20, alphabetical list – and don’t forget, war sucks!

One of the best and most characteristic Alice in Chains songs, “Rooster” comes from the “Dirt” album, it was its fourth single, released on February 22nd, 1993. The song was written by guitarist Jerry Cantrell for his father, Jerry Cantrell Sr., whose childhood nickname was "Rooster" and served with the U.S. Army during the Vietnam War.

A classic, fan-favorite song of Anthrax, “Indians” is included in the “Among the Living” album (1987). It was the second single of the album and it is a tribute to the mistreated Native Americans, when European settlers took over their land. The fantastic guitar work of the song, together with the catchy vocal lines of part Native American singer Joey Belladona, make this tune a thrash metal anthem.

A heavy metal masterpiece by Black Sabbath, “War Pigs” stands as a heavy metal milestone, a heavy metal mold, which includes the anti-war lyrics of bassist Geezer Butler. It was inspired by the Vietnam War. The Brummies got the idea from war stories they heard, when they did a show at an American Air Force base during a tour of Europe. An 70s anti-war metal opus, which originally was named "Walpurgis”.

A fantastic song from a gorgeous album, “Hysteria”, which was released in 1987 and was a tremendous success. “Gods of War” is very interesting in its development and is mainly based on the amazing guitar work of late Steve Clark. Inspired by what he saw on the news, lead singer Joe Elliott takes on world leaders and their penchant for starting wars that others will have to fight. It's the only track from “Hysteria” with any political overtones. “Gods Of War” represents Def Leppard’s sound and shines brightly, even in our times.

Taken from “Use Your Illusion II” (1991), this wonderful mid-tempo, elegiac song by Guns N’ Roses originally appeared on the 1990 compilation “Nobody's Child: Romanian Angel Appeal”. It is a protest song on war, referring to all war as "civil war" and stating that war only "feeds the rich, while it buries the poor". This amazing track speaks to the mind and touches the heart, in the phenomenal Guns N’ Roses way. Did you know that “Civil War” was the only song on the “Use Your Illusion” albums that featured Steven Adler on drums? The rest were done by Matt Sorum.

A Steve Harris composition, "Afraid to Shoot Strangers" is a political song from the point of view of a soldier in the Gulf War, which Bruce Dickinson would often introduce as an anti-war narrative. One of the most progressive, dramatic and intricate works of Iron Maiden, it was released in the “Fear of the Dark” album (1992) and Maiden used to play it in concerts, even during Blaze Bailey’s tenure.

A song about the threat of nuclear war, “Two Minutes To Midnight” is a characteristic Iron Maiden song, which contains all the ingredients of the Maiden sound. Necessary part of all Iron Maiden live concerts, it was included in “Powerslave” and has taken a place in the heart of every metalhead. The song title is a reference to the Doomsday Clock, which was created in 1947 by the magazine “Bulletin Of Atomic Sciences”. Adrian Smith and Bruce Dickinson wrote this fascinating metal tune.

This iconic song is a synonym of classic, traditional heavy metal. Judas Priest took a composition of Bob Halligan Jr. (vocalist/guitarist of Ceili Rain), as they did with “(Take These) Chains” in the “Screaming for Vengeance” album, and transformed it to a heavy metal anthem. A Priest fan-favorite to date, it showcases the passion, the feeling and the quality that Priest always had. I can’t stop listening to the sentimental guitars and the high-pitched vocals of the Metal Gods. The song’s lyrics refer to the torments of combat and the consequences of war.

“Rust in Peace”, the fourth studio album of Megadeth, begins with “Hoy Wars … The Punishment Due”, which was written and produced by Dave Mustaine. From the first chords to the last second, this complex, technical, ingenious song haunts you with its super-catchy riffs, vocal lines and guitar solos. Mustaine/Ellefson/Friedman/Menza perform in supreme verve and what we finally get is marvelous. The song lyrics deal with global religious conflict, particularly in Israel and Northern Ireland. An anti-war thrash metal masterpiece.

One of the best-known Megadeth songs, a historic thrash metal tune, which deals with disillusion, Cold War politics and military combat - all recurring themes in Megadeth songs. Written by Dave Mustaine, “Peace Sells”, from the second album of Megadeth, “Peace Sells … But Who is Buying”, reflects Mustaine's political and social beliefs. Not just a simple anti-war song, “Peace Sells” lyrics are a disapproval of the American way and convey Mustaine's wish for a new social structure. A thrash metal hymn, in the special thashy way of Megadeth, with the cautic words of Mustaine.

Metallica have always been a politically sensitive band and many songs of theirs have anti-war messages. Especially, “Master of Puppets” is a studio album, which from many aspects speaks against war. “Disposable Heroes”,  refers to the soldiers, who are regarded merely as material to be expended in war, the heroes, who the country disregards. A thrash metal tornado, this intense, complex, frenetic Metallica opus was composed by James Hetfield, Lars Ulrich and Kirk Hammett, and has been covered by many artists, like Dream Theater, Chimaira, Metal Allegiance and others. It is Corey Taylor’s favorite Metallica song.

“One” belongs to the most significant heavy metal songs ever, a classic Metallica song, off the “… And Justice For All” album. This epic, dramatic composition (by Lars Ulrich and James Hetfield) portrays a World War I soldier, who is severely wounded—arms, legs and jaw blown off by a landmine, blind and unable to speak or move—begging God to take his life. In the music video, attempting to communicate with the hospital staff, he jolts in his bed, spelling "kill me" in Morse code. This video contains scenes from the 1971 anti-war film “Johnny Got His Gun” and soon enough, was ranked number one on MTV.

A top hit, a big commercial success, “Out in the Fields” is a Gary Moore composition, which features the vocals of Moore and Phil Lynott. The two Irish musicians had been bandmates in Thin Lizzy. This legendary song was released as a single in 1985 and in Moore’s “Run For Cover” album of the same year. It refers to the Northern Ireland conflict, however, it’s recognizably a general anti-war song.

Rage Against the Machine is a politically active/sensitive band, which very often refers to war, peace and solidarity. Tom Morello, Zach De La Rocha and the other guys presented fresh, catchy, guitar driven rap/nu metal and “Bulls On Parade” is one of their finest contributions. The incredible groove of this song shook the rock/metal scene from its foundations, as well as the lyrics, which refer to the US military, their aggressive tactics and the arms industry that encourages war to get military contracts. An anti-war killer song, in the unique style of Rage Against The Machine.

Traditional metal legends Saxon released this anti-war song in 1985. Included in the “Innocense Is No Excuse” album, “Broken Heroes” is a power ballad, which contains Biff Byford’ s trademark voice, the elegant guitars of Graham Oliver  and Paul Quinn and the unmistakable rhythm section of Steve Dawson and Neil Glocker. Lyrically, it was inspired by the Falklands War, but it contains also clear references to earlier conflicts, in particular the Vietnam War and World War I.

An unforgettable, mesmerizing anti-war power ballad by Scorpions, a classic song for peace, which was written by Klaus Meine, following the band's visit to the Soviet Union at the height of perestroika, when the enmity between the communist and capitalist blocs subsided concurrently with the promulgation of large-scale socioeconomic reforms in the Soviet Union. Included in 1991’s “Crazy World” album, it quickly became a worldwide hit, after the failed coup that would eventually lead to the end of the Soviet Union. During the most recent Scorpions concerts, Meine has changed the lyrics, which refer to Moscow, due to Russia’s war against Ukraine.

Sepultura’s fifth official single, “Territory” is an anti-war classic, which speaks about world leaders who use propaganda and hate to foment fear, leading to territorial conflict. It comes from the “Chaos A.D.” album (1993), where Sepultura became less thrashy and groovier. With lyrics written by guitarist Andreas Kisser, “Territory” remains a Sepultura concert staple to this day. The song’s music video was shot in Israel and was directed by Paul Rachman.

The opening track of “Reign in Blood” is a Slayer signature song, one of the best thrash metal songs ever, annoying, blaring and stirring. It was written by Jeff Hanneman, after reading books about Nazi physician Josef Mengele, while on tour with the band. Mengele did human experiments at the Auschwitz concentration camp during World War II. A live favorite, part of the thrash metal evangel named “Reign In Blood”, “Angel of Death” is an influential song, which describes the madness of war and ends up as a brutal anti-war anthem.

“South of Heaven” is defined as one of the great Slayer albums, and “Mandatory Suicide” is one of the reasons why! The main guitar riff kicks ass and Tom Araya’s performance is magnificent. Lyrical wise, this killer tune is about a soldier who is forced into battle on the World War II beaches of Normandy. The solider sees his comrades dying all around him in a hail of German gunfire. The spoken part at the end of the song describes the death of the solider from his own perspective.

This fan-favorite, super-heavy, complex, brilliant System of a Down song refers to the business behind war, and how politicians start them, expecting the poor to fight them. Creedence Clearwater Revival talked about the same thing on “Fortunate Son”. “B.Y.O.B.” stands for “Bring Your Own Bombs”, just like in the parties, where you bring your own booze. The song can be found in “Mesmerize”, a stunning, ingenious album, which shocked the world of rock/metal music, when it got released in 2005.