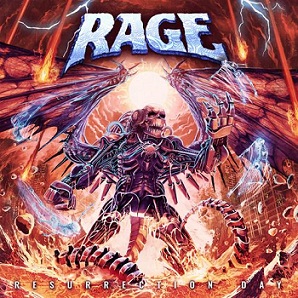 Rage is a synonym of musical quality and dignity. The Teutonic thrash metal machine is offering us its new album (“Resurrection Day”) and for another time, we get what we’ve expected – that is, thrash metal with an attitude, thrash metal sophisticated and groomed, not only for the thrash metal maniacs, but also for every fan of top class heavy metal music. So we have here the big riffs, the technical solos, the hook lines, the tight rhythm section, the solid, clear sound and of course, Peavy’s distinctive voice. All these nice ingredients are integrated in beautiful songs, where different musical elements are brilliantly merged. The title-song of the album, “Virginity”, “Arrogance and Ignorance”, “The Age of Reason”, “Monetary Gods”, “Black Room”, to name but a few, are incredible compositions, which will make you wanna headbang, but at the same time will take you on a wild ride in dreamy soundscapes. There is much inspiration in “Resurrection Day”, fantasy and maturity in the song writing from a veteran band, which is still prolific after all these years. Sure, this new album cannot be compared to the classics of the past, we don’t deal with a masterpiece, however, it is an exquisite album, which will be adored by the fans and praised by the critics. Rage is present, Rage sounds stonger than ever, and its new installment is a melodic thrash metal album that proudly bears the seal of Mr. Peavy. You gotta listen to this disc!