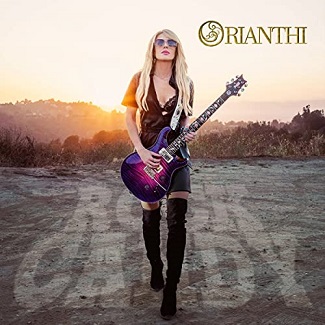 Orianthi Penny Panagaris or as we know her by her stage name, Orianthi, has delivered a masterpiece. “Rock Candy” was her second release in 2022, following “Live from Hollywood”, a live CD/DVD and Blu-ray. This girl is a kick ass guitarist and gladly Alice Cooper chose her, as one of his guitarists. Orianthi has improved a lot, since the release of her first album, “Believe”, and it’s been thirteen years, since we’ve heard her name. “Rock Candy” is her best work to date and we can clearly hear it! The record was produced by Jacob Bunton, who has worked with Mariah Carey, Steven Tyler, Smokey Robinson, Akon and Pop Evil. The album opens with “Illuminate (Part I)”, which is a great opening track to hear her potential and guitar chops. We can point out some Joe Satriani influences in it! The next one, “Light It Up”, has more feeling to it, a solid, groovy rock ‘n roll heaviness inside it. “Fire Together” is sexy, resembles Lzzy Hale (from Halestorm) and has an 80s vibe into it. “Where Did Your Heart Go” is a ballad that will give you shivers and goosebumps. Orianthi’s voice is beautiful and impeccable. “Red Light” is a highlight of the album, with a speedy guitar solo. “Void” is more eclectic, with a different vibe compared to the other album tracks, in my opinion, the best song of “Rock Candy” - Once you hear it, you will understand why! “Burning” features some Industrial guitar combos and stands as a rock song, with strong melodies and interesting guitar layers! “Living Is Like Dying Without You” seems like a ballad, it reminds of Skid Row’s “I Remember You”, and if you’re into this kind of music, then this is for you! It will touch your soul! “Witches And The Devil” will make your dark side come out! “Getting To Me” gives the album one last hard rock masterclass. Finally, “Illuminate (Part II)” finishes the album, like it starts. Brilliant and with a great violin part, played by Bunton! Orianthi is an awesome guitarist and this album is to die for! The best she has done so far. Hands down for it! Go grab a copy, right now!