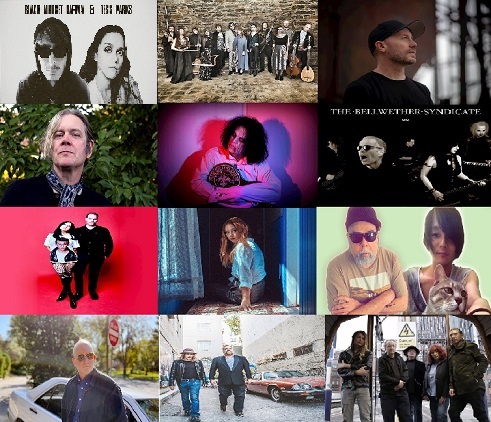 Here we will share our impressions on some singles that were recently released. Myth of Rock listened to these nice songs and writes down its thoughts. What a lovely music journey it was!

Black Market Karma – “The Sky Was All Diseased”: UK artist Black Market Karma presents in collaboration with Tess Parks the song "The Sky Was All Diseased", a fine mix of indie rock, power pop and psychedelia. I particularly liked the distorted sound of the guitars, the shaking rhythm section and the elegant vocals. This song is an emotional roller coaster, which cannot be forgotten!

Rob Munk – “Youth”:   What a catchy song! It is a relaxed, mid-tempo tune that proves Rob Munk’s smart songwriting and top-notch performance. Munk has the inspiration needed to compose a hit song, full of fresh, excellent music ideas. Sooner or later, “Youth” sticks in your mind and it is part of an excellent album by Rob Munk, “Phased Out”.

The Pull of Autumn – “Live Today”: Trippy and luminous, this single will take you on an adventurous ride above the clouds! I don’t know if this music is pop or rock, but The Pull of Autumn grabs you and lets you free in a fantastic, elegant, heavenly cosmos, far away from everyday routine.  “Live Today” could be the soundtrack of your most beautiful dream!

Beauty in Chaos – “Bloodletting (The Vampire Song)”:  In “Bloodletting”, Beauty in Chaos stands at the phenomenal point, where gothic rock meets cabaret music! This song is a gothic anthem, enchanting, majestic and sophisticated, with some great performances – I loved the dark, arrogant vocals, the fiery guitar solo and of course, the manic use of the saxophone! I could talk for hours about this song – you just have to search for this group, for this song …

Elliot Cole, Fiona Gillespie and Makaris – “Tam Lin”:  “Tam Lin” isn’t just a song, it is a music gem. It lasts 26 minutes and is a singular opus, where celtic/folk music, baroque, opera and art rock combine. I didn’t know what to expect before I dedicate my time and attention to this epos. We are talking about a real masterpiece, which contains a real orchestra (the Makaris ensemble) and of course, the amazing vocals of Cole and Gillespie. An impeccably-orchestrated and well-performed 17th-century ballad and fairy tale, for the sheer bliss of every music listener!

Faith Marie – “Rock Bottom”: The world of pop music shall welcome a new hero. Faith Marie, the alt-pop singer/songwriter, gives us an example of brilliant pop, with a chill-out vibe and a dancing groove, titled “Rock Bottom”. This single will make you wanna shake up down and sing along every vocal line – full of melodic hooks, it is sure that you won’t be able to resist. Congratulations to Faith Marie, that’s an undeniable hit.

Seal Party – “You’ll Be Fine”: Oakland-based art-rock duo Seal Party comes back with a new album (“New Age Distribution”) and drops the single “You’ll Be Fine”. Smooth and sophisticated, this song showcases Seal Party’s songwriting and orchestrating skills and succeeds in tempting the listener to listen to the whole album. The song culminates in a trumpet solo by Rich Armstrong! “You’ll Be Fine” is a preview of an outstanding album.

The Speed of Sound – “Charlotte (12 inch Version): This indie pop/rock band, which hails from Manchester, UK, managed to caught my attention with a strangely charming song, titled “Charlotte”. Indie sounds, with a complex approach of the arrangements and an arty attitude, all in the unmistakable melancholic British way, will take you by surprise and leave you wanting more and more. The Speed of Sound invite you to their beautiful soundscapes, you’d better heed their call!