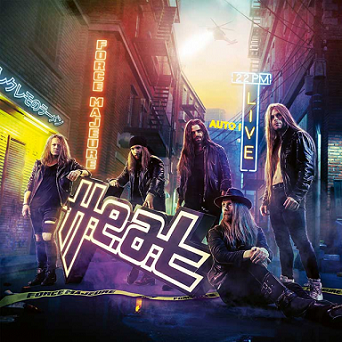 Upplands Väsby, a suburb on the north side of Stockholm, is the birthplace of great hard rock bands, like Europe, and… H.E.A.T! The latter have been ‘rejuvenated’ and in great form lately, especially since their lead singer Kenny Leckremo came back to the band in 2020. Together since 2020, they released the very successful ‘H.E.A.T II’ and now they bring us ‘Force Majeure’, another superb album which has many hits and very positive energy and flow along the way. It kicks off with the majestic ‘Back to the Rhythm’, an arena friendly track, one that the band will be playing on and on during their live gigs, a fan favorite for sure. As previously said, Kenny has brought back a fresh air and his unique way to please the audiences and especially the old fans of the band, who are in favor of the early years. ‘Nationwide’, ‘Tainted Blood’ and ‘Hollywood’ can be easily considered among the best of the album, simply because you would like to hear those live from the band! The groove, the energy, the anthemic choruses, the guitar and keyboard solos are incredible. This album simply rocks! There is a continuous ‘who-oah’ which you cannot resist, and all the band has just excelled. The pace slows down just a single piece with ‘Harder to Breathe’, but the mighty Dave Dalone, the guitar player, plays so emphatically all the riffs, rhythm and lead, together with the super duo behind the drums Don Crash and bassist Jimmy Jay. The band is so well worked together from the production perspective as well, where everything in the record is crystally clear, but very solid and well put, not sterilized but farfetched. ‘One of Us’ is a beautiful power ballad where Kenny ‘delivers the goods’ in his own trademark mellow and soothing style. Ending the album, you find ‘Wings of an Aeroplane’, a perfect example for an outro tune and the significant H.E.A.T-ish groove and elegant mode. ‘Force Majeure’ represents what exactly H.E.A.T is all about, their DNA, their music status throughout the years and what they are capable of. This record has a lot of references and glimpses on their past, but with the eye towards the present and future, carrying over the freshness, inspiration and creativity of its members who are now back altogether for good.