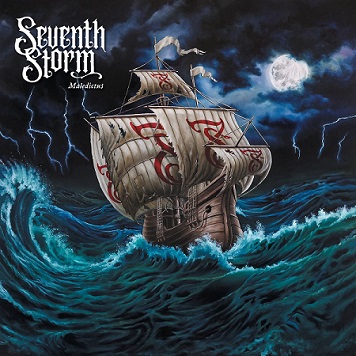 When Mike Gaspar left Moonspell, everybody was surprised and wondered what was going to happen to both parts. It was a kind of a challenge, that emerged from the shadows and with new hope, came with a new light. This new Portuguese project, that was found in the city of Lisbon, the capital of Portugal, delivers a new music context and believe us, it’s a good one! But first, let’s introduce the members: Mike “Storm” Gaspar on the drums, Rez on vocals, Ben Stockwell on guitar, Josh Riot on  guitar and Butch Cid on bass. Their sound comes from the influences of the band, such as Bathory, Tiamat, Paradise Lost, Fields Of The Nephilim, Dead Can Dance and Cradle Of Filth. And they’ve delivered the best debut record a band could bring! Their gothic metal sound is huge and superb! The first track of “Maledictus” is called “Pirate’s Curse”. It starts with a windy breeze, before we hear a roar from Rez, which will introduce the song. Rez has an amazing voice, that shows and brings heaviness and passion into every song he sings. It has a mid-paced sound. The keyboards and the melodic guitar riffs are combined with sounds of pipes and other progressive elements, which transport us into the imagination of seas and oceans. The drums are amazing! ... it’s a beautiful song! “Saudade (English Version)” is the second track! It means a feeling of longing, melancholy or nostalgia, supposedly characteristic of the Portuguese people and I speak for myself, since I’m a native Portuguese person. It has a very thrashy and then mid-paced verse, and a very strong chorus. Rez’s vocals are superb as he sings “I am Saudade”, we can hear the strong feeling he gives to it with his voice. It feels like a Fado! There are great guitar lines, and the piano will help the image of the song. “Sarpanit” has influences of Middle-East, and we can hear them on Mike’s drums and on the guitars. It has a citar vibe and chantings. Like “Gods Of Babylon”! And here it is: “Gods Of Babylon”! This one has a black metal intro and double kicking drumming, before a heavy metal jam. Strong and melodic verses come and chugg the riffs in this thrash/black metal song! For die-hard fans of Mayhem! “The Reckoning” has some vibe that reminds the style of Dream Theater. It has one of the best riffs of the record,  a powerful chorus and a dark feeling, that comes along with the keyboards. “Inferno Rising”, best song of the record, combines Dream Theater and Megadeth. It would be a song that Dave Mustaine could easily write and sing. Light and heavy collide, we can see how dynamic Rez, Mike, Ben, Josh and Butch really are. “Seventh” starts with a crow and has incredible layers.  “My Redemption” features the best drumming intro you’ll ever hear by a band. Nice guitars riffs, followed by double bass drumming, but also very nice acoustic lines. Give it an applause for the guitar solo and the drums in here. “Haunted Sea” spins into epic, black, nu, and progressive metal. It might be haunted, but do not fear. Finally, there are three songs as bonus: “Saudade Acoustic (English Version)”; “Saudade (Acoustic Portuguese Version)” and “Saudade (Portuguese Version)”! The Portuguese word “Saudade” has a strong feeling and meaning and, you might don’t understand it, but it goes straight into your heart. Trust me, I know it will! Just check the videos they made just for this song. Your heart will melt like butter, you’ll cry your heart out! The best band that came out this year from Luís de Camões e José Caramago land is here! The best debut record too!