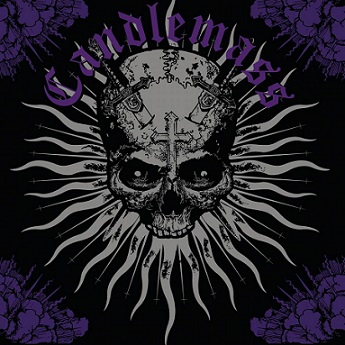 “Sweet Evil Sun” is Candlemass’ thirteenth album and the third one with the mighty Johan Längqvist, whom is such a pleasure to have back in the band as he is the living history and legend of the Stockholm band. The new album does not re-invent the wheel. It does not re-discover planet earth and does not need to do so of course. The master Leif Edling makes sure that the core and heart of this mythical band stays intact. Thank God for this. Whoever would be expecting surprises, ‘newish’ elements, and a shift to another destination for Candlemass, will be disappointed. Hallelujah! Who says that a band should constantly change, shifting gears and direction just to make ‘some’ happy? And also, they do not need AT ALL to prove anything to anyone. They are the true Doom Masters and Kings no matter what. The new album is another testimony of pure Doom metal from the finest out there. Mappe and Lars make sure about one of the heaviest guitar duos we have listened. Massively heavy with the church bell ringing on “Angel Battle”, together with the sound of falling rain and thunder. You can make the connection here.. “Black Butterfly” is another fine moment where Johan Längqvist just shines on the slowly paced riff.. Oh, how much I would like to listen to this one live soon! “When Death Sings” is a beautiful track, where Jennie Ann Smith of Avatarium makes a guest appearance on backing vocals, on a full harmony and synthesis with Johan’s voice, an outlining moment of the record which adds brilliantly to the overall feeling and structure. “Scandinavian Gods” is a majestic new-old masterpiece of Candlemass, a track which embodies the whole essence of this band: Slow paced. Super Heavy Guitars. Epic vocals. Doom to the very core! “Devil Voodoo” sets up a different tone with the acoustic guitar and the dramatic vocal line of Johan, setting off later to a faster paced rhythm and unfolding to a more classic heavy metal piece which the trademark elements of Candlemass and a variation of elements within the same song itself, which lasts seven and a half minutes. Simply brilliant! And definitely a highlight of the album! “Crucified” and “Goddess” are another two dazzling and emphatic songs which make this record a very emphatic return of Scandinavian Gods. Without any hesitation or second thoughts (Candlemass don’t leave any room for this) ‘Sweet Evil Sun’ is a very fine moment for the band, a record which establishes them more profoundly on their throne for which they have worked so hard throughout the years and this album is the perfect example of how a legendary band can make such a really good record, having so high self-esteem and knowledge of what they are capable of.  In Leif Edling I trust!