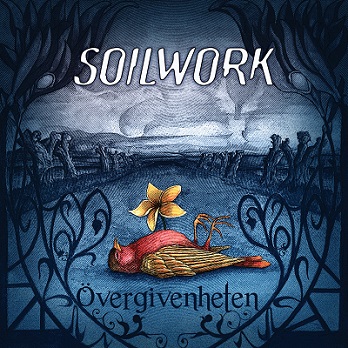 Soilwork’s twelfth record is ’Övergivenheten’, in English it means “The Abandonment”. A title in Swedish like with the previous ‘Verligheten’. This is a beautiful, very melodic album, probably among the more melodic ones, made by Björn Strid & Co. along the years. The overall mood is gloomy and melancholic, where the emphasis is on Björn’s amazing clean vocals work throughout the album. Since he had started The Night Flight Orchestra, he has tremendously improved the way he delivers the vocals, and this album is another testimonial of that. Trust me, this album is by no means far away from the typical Soilwork DNA and foundations. David Andersson (RIP) and Sylvain Coudret play fantastic guitars on solos, leads and rhythm ones. Bastian Thusgaard and Rasmus Ehrnborn provide a very solid rhythm section, with blast beats and fast paced drumming. However, it is more than evident that the harsh, heavy and ‘death metal’ side of the band is not on the spotlight here. And this is not necessarily bad of course, as the record reveals all these elements which have made Soilwork such a prominent band all those years. Most of the tracks balance between those two worlds, the melodic and the heavy one, and this is where all the Soilwork DNA is unfolded. Of course, this one could barely touch the legendary ‘The Chainheart Machine’ or ‘A Predator’s Portrait’, which are the band’s best records for me, however, it shows how much the band, and especially Björn who is the mastermind here, has evolved and has gone into a new phase where melodies, choruses and vocal lines are better worked and are placed in the forefront. This ‘melodeath’ - as some have said – style is at its best, with tracks as “Is It In Your Darkness”, “Vultures”, “Death, I Hear You Calling”, “This Godless Universe” being superb examples of that. My personal favorite and the track which bridges all different elements on this album and could be the trademark of their sound here is “Dreams of Nowhere”. What is also very interesting for the variety and diversity of the album, adding to the album’s influences, are the two instrumental pieces, “Morgongåva/Stormfågel” and “The Everlasting Flame”, two beautiful but short compositions, which do not mess up with the whole structure but to the contrary add to the gloomy and moody atmosphere in a really mellow way. I am not one of the fans who are disappointed on how things have gone lately (well, since “The Living Infinite”) for Soilwork, as I truly enjoy the blending of harshness and melodies they show, as long as this is backed up and composed with interesting and catchy ideas of course. ’Övergivenheten’ is a very well balanced, inspired and genuine album, which will not impress and shine all the way, but, it will definitely make you satisfied and fulfill the side of yours, thriving in-between melodic choruses, harsh guitar riffs and blast beats.