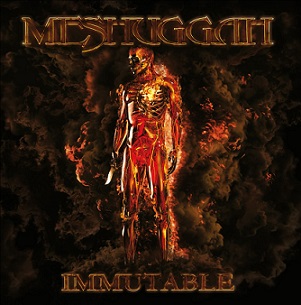 Now that’s a difficult task indeed! How can a humble reviewer describe Meshuggah’s musical disruption? How can he/she refer to something that sounds like a mathematical, polymorphic, industrialized, chaotic black hole, where despite the term “chaotic” everything is in order? Meshuggah’s vison has become vast, unconstrained, unreachable, undefinable (use as many words prefixed with “un-” you like), due to their members’ incomparable technical skills. Sadly, a review can only give a glimpse of what Meshuggah really do.

The peculiarity and complication of their music always attracted me. I find it challenging trying to focus on their patterns and messages, that require higher levels of attention and introspection. However, no matter if you like them or not, we have to reach an agreement: Meshuggah do something unique. They’re inventors of trends and leaders, with countless followers/imitators.

Every new Meshuggah’s album is always a hot topic in metal community. “Immutable”, their first album via Atomic Fire, after the long-time collaboration with Nuclear Blast, wouldn’t be an exception, given that six years passed since their last effort (that was the longest period without new music from them). This unusual absence “cultivated” additional curiosity among fans, regarding the orientation of the new album: would it be rather direct, like “ObZen” and “Koloss”, or more complicated, like “The Violent Sleep of Reason”?

First things first. “Immutable” declares a twofold message about Meshuggah’s essence, meaning that their flame doesn’t wither after thirty-five years, and the lyrical concept, implying that humanity commits repeatedly the same mistakes, without learning from the past. Hence, “Immutable” is dark enough, depicting the band’s pessimism about humans’ faults, but their existentialism is communicated through a less complex structure than “The Violent Sleep of Reason”. Of course, that doesn’t mean that “Immutable” is an “easy” listening; not at all (have in mind that terms like “easy” or “direct” are something abstract in Meshuggah’s case)! I mean that “Immutable” uses less chaotic patterns, in favor of a more straightforward approach.

Their groove, stronger than ever, returns to make you -as always- think (and not just bang your head). However, this time melodicism is intensified, coming to the foreground in certain cases; this might be attributed to Thordendal’s absence from songwriting duties (most tracks were written by Hagström and Haake). Throughout the album, you cannot but admire its musicianship and all members’ skillfulness, taking pleasure in Meshuggah’s familiar multi-level approach. You hear intense, recurrent, hammering grooves, Thordendal’s paranoid, out-of-this-world solos, Kidman’s hateful and more pluralistic vocals, and -above all- Haake’s prominent performance behind the drum-kit, who leads the others masterfully, making his drumming rather expressive than intense, and encompassing a jazzy feeling. Definitely, he’s responsible for launching Meshuggah’s music to universal levels.

“Immutable” thrives with patterns that evolve parallelly, co-existing harmonically within a sardonic, nightmarish sphere. You can find points of excellency, like the asphyxiating, ominous “Abysmal Eye”, the peculiar, introverted “Phantoms”, the aggressive, menacing “Armies of the Preposterous”, and the rather esoteric instrumental “They Move Below”. There is available space even for the mere tremolo-picking interlude of “Black Cathedral”, or for the acoustic conclusion of “Past Tense”, that lightens the ear from all the preceding grooves.

However, Meshuggah cannot avoid a trap, which isn’t the duration itself. “Immutable” lasts sixty-seven minutes; that’s their lengthiest album. But it’s evident, even from the first listening session, that the recipe of constant, heavy grooves is repeated extensively, tending to tire the ear after around fifty minutes, despite the undoubtedly high-quality standards. Bringing in mind albums after “Catch Thirtythree”, I conclude that Meshuggah tend to settle within a given context and restrict their experimentations. Indeed, pre-ObZen albums were more daring and extraterrestrial; in that sense, “Immutable” is another addition to the sound that the band has formed in the last decade, without being as “rich” in ideas as earlier works (it isn’t another “Chaosphere” or “Nothing”). Of course, most bands cannot even dream of composing these “more-conventional-than-usual” albums (let’s call them that way, for the shake of oversimplicity).

“Immutable” offers plentifully Meshuggah’s outstanding composing and performing abilities, without expanding the band’s universe though. Surely, you’ll be overwhelmed by their patterns and skills, as always. However, some of you may be “bothered” by their tendency to somehow decelerate their exploration of the unknown. Humbly, I don’t think that the settlement to more familiar territories should be conceived as a detrimental factor that affects the album quality. Maybe, it’s the normal course of things for them… Anyway, I’m sure that the “experienced” Meshuggah’s fans will surely listen to the album from start to finish. As for the newcomers, “ObZen” and “Destroy, Erase, Improve” might be better starting points.