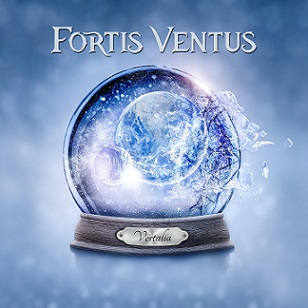 Greece, home of the Gods (such as Zeus, Apollo etc.), Greek mythology, amazing gastronomy, wine and ocean. This fine and beautiful country has also good metal bands and one of them is Fortis Ventus! They combine symphonic elements with cinematic and soundtrack influences. If you listen to their songs, you may think that you are in a movie! They were formed in 2015 and self-produced their first EP, “Haunted Heart”, in November 2017. Composer, arranger and keyboardist George Halliwell and vocalist, lyricist Nancy Mos are the strong forces of the band. “Vertalia” is their debut album. It is a concept album based on a novel-fairytale, written by keyboardist George Halliwell. The album starts with “Between Love and War”, a cinematic opening, with a nice orchestration, played by George Halliwell ... so beautiful! The symphonic part is performed by Nancy Mos, in a duet with Dee Theodorou (singer of Illusory). The guitars are powerful, played by Gregory Koilakos and double-bass drummings can be heard, for which Gregory Giarelis was responsible. “Birth Of Sadness” isn’t as sad as you may think! The music starts with an astonishing violin piece, played by Phedon Vriniotis, followed by slow keyboards. Then piano is heard, that suits with Nancy’s voice so well. It’s a slow tempo song, perfect for Nancy. The title track, “Vertalia”, has great orchestrations and arrangements, and Nancy’s voice is the final piece of the cake for this masterpiece! “Cave of Glass” is a traditional symphonic metal song, but the instruments and orchestration give a different flavor to it, especially the guitars at mid-tempo. “Living Thorns (prelude)”, like the title says, is a prelude for the next song and its story. The orchestration and the piano are the key poinst for it and for what’s about to happen! “Gothecia” has powerful guitar riffs, it’s very dark and mysterious, one of the best and well produced songs! “The Unveiling Path” opens with a small intro of cello, played by Maria Mazaraki-Ainianos. It has the longest instrumental part in the album, with Vriniotis playing again the violin, but a symphonic metal section  starts, with catchy melodies, before the chorus – you will discover also power metal elements. “My Death Is My Devotion” comes next and once again metal instrumentation and orchestration is the strong point in the song. It has one of the heaviest riffs of the album, but also the darkest! There’s another prelude, “Door to the Unknown (prelude)” and the album continues with “Reflections of Myself”. Here’s a guest backing vocalist, that makes it very cinematic:  Michalis Artz! The highlight? The guitar solo! “The Eagle’s Chase” is a fast-paced song, and it is easier to listen. “Homeland” is a slow song and the orchestration with strings is superb. The album finishes with a ballad, Nancy’s voice is ideal for those kind of compositions! Undoubtedly, this charismatic band comes up with a beautiful record that should be a soundtrack for any movie!