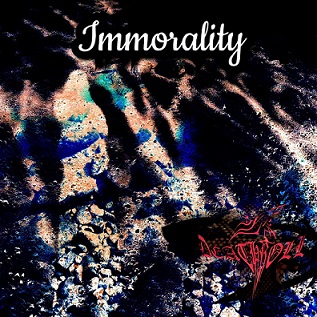 Deathroll is a one-man metal project, formed by Japanese singer/songwriter Kazu, and “Immorality” is the project’s new album. If I had to define Deathroll’s music style, I would say it is death/black metal, delivered with conviction and passion. However, I think that this definition is a bit narrowing the band and its artistic orientation, because in the songs of “Immorality” you may find melodies, heavy/doom stuff and complex/progressive song structures. So, it would be better to say that Deathroll is making extreme metal art, which sounds very interesting to my ears. Somewhere between Scandinavian death metal and Japanese black metal, Deathroll is composing nice songs (for example “Collapse Ethics”, “Desolate”, “Hell On Earth” and “Obscenity Named Brainwashing”), which are brutal, harsh and grim. With sharp guitars, thunderous drums and torn vocals, “Immorality” won’t leave you indifferent. To the contrary, prepare yourself for something tremendous that will grab you by the neck! “Immorality” stands as a beautiful piece of dark, extreme art – the only objection that I have is about the sound production, which could be cleaner and less pitchy and piercing. Despite that, the new Deathroll album will pique your interest from the very first time you will listen to it. To sum up, Deathroll returns with a much intriguing, compelling new album, which shall put its name on the map of the extreme metal genre. It’s time to learn about this Japanese death/black metal project – in the future, we may taste even greater things from Kazu!