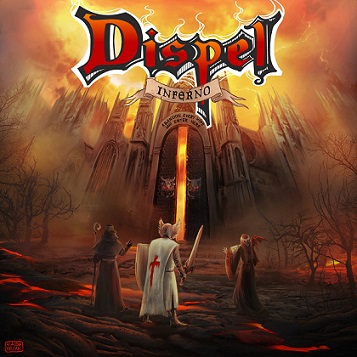 Dispel is an electronic gothic rock band from Cleveland, USA, and “Inferno” follows its “Lore” debut album. Just like “Lore”, “Inferno” is a nice, balanced amalgam of gothic, rock and electronic music, which transcends all the barriers. However, even if “Inferno” is stylistically successful, Dispel need to try more in terms of songwriting and sound production; the band could have worked more on the songs, which sound a bit raw – and the sound production is somehow poor, not finally helping the overall result. These impressions don’t mean that the new songs lack inspiration – on the contrary, this new album has many fresh ideas, which reflect the band’s vision and resonate its fine taste of melody and rhythm. Based on a solid, dense rhythm section, the songs of “Inferno” have heavy guitars, elegant, dark keyboards and heavenly, elegiac vocals – it’s Ravensea, who sings so passionately, sometimes like an angel, sometimes like a demon. There are some great, enchanting moments here, which show how much interesting Dispel is as an artistic collective, for example in “Dispater’s Lust”, “Flames of Greed” and “Glasya’s Heresy (acoustic version)” and “Cistern of Treachery”. “Inferno” features dark melodies, a fragile feeling of sadness and a theatrical sense in the song arrangements and the performances, important ingredients of a unique collection of art. If you like bands like Evanescence, Tristania, Tiamat, Theatre of Tragedy etc., you will surely relate to this second Dispel album. Judging by the whole effort of the band, on every level of this new album, I am sure that the next Dispel album will be a mature, top-class electro-gothic rock installment!