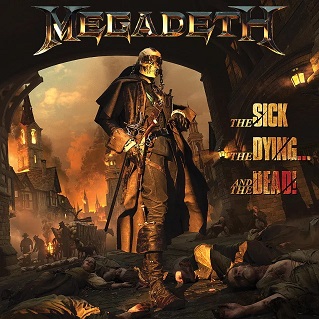 Six years after “Dystopia”, Megadeth return with a new album – nothing was strong enough to stop Dave Mustaine, who overcame the COVID-19 pandemic, David Ellefson’s sex scandal, even throat cancer, and stands here, having written fantastic new songs, released under the clever title “The Sick, The Dying … and The Dead”. “Dystopia” was a blast, so Mustaine was even more “obliged” to deliver a killer new album. And he did it, since this new studio release shall be described as a bunch of great songs, which proudly bear the seal of Megadeth. Next to Mustaine, we find Kiko Loureiro (guitars) and for the first time, Dirk Verbeuren (drums) and Steve Di Giorgio (as a session bassist) - Megadeth’s thrash metal machine is not only working, but it is also at full throttle. Dave Mustaine has penned excellent compositions, in the typical thrash metal style of Megadeth. Complex, immediate, massive, the new tracks bring an orgasmic euphoria to the listener: Mustaine and Loureiro did an amazing work on the guitars, while Di Giorgio and Verbeuren formed a precise, solid, dense rhythm section. Besides this inspiration, the technique and the passion, the new album has an ideal sound production, which enabled all four musicians to express themselves. Dave Mustaine and Chris Rakestraw are responsible for the ultra-heavy, super-thick sound of the album – the riffs are falling upon you, just like an anvil in free fall, the refrains stick to your mind like leeches! Last but not least, the new compositions incorporate all Megadeth’s key characteristics, all the basic elements that the band had demonstrated until now are apparent. “The Sick, The Dying … and The Dead” will remind you of “Rust in Peace”, “Countdown to Extinction” and “Youthanasia” – of course, it is not a copy, but a mature work, which mixes all the Megadeth ingredients … Six years after “Dystopia”, Dave Mustaine shouts that he and his band are still present, more powerful, more cataclysmic, more relentless than ever! This new album is a big step for Megadeth, who keep their fans warm and become attractive to the young listeners. Yes, that’s a victory!