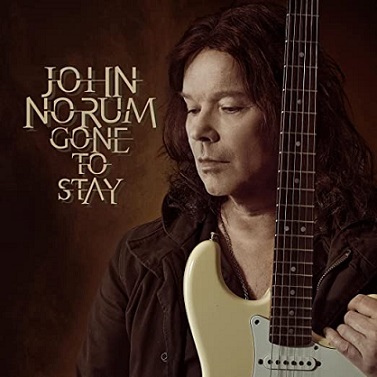 The guitar hero has returned, following several years of hiatus with his solo band, releasing a brilliant new album, called ‘Gone to Stay’. As the title could potentially imply, John Norum may have previously left with a long pause, however, the new album is a statement that he is back for good. This is a diverse album, which incorporates most – if not all – Norum’s influences and inspirations. There are moments, where you can think of Michael Schenker, Frank Marino or even Jimi Hendrix on the riffs, the overall handling of bluesy or more heavy parts of songs (e.g. ‘What do you want’ or ‘Norma’ – a personal favorite from the album and a bit more fast paced song). Of course, this is another proof of how good singer John Norum is, how capable he is managing lead vocals, there is no surprise here at all. After all, he has so successfully dealt with lead vocals throughout his discography, to the extent that he feels and shows so confident about it. A very interesting moment of the album, and to verify what was just said about his vocals and the diversity of this album, is his cover of ‘Lady Grinning Soul’ of David Bowie, a song back from the far 1973, a very beautiful and special song, which is so delicately and amazingly good done by Norum. The way he sings and performs, the way he respects the song itself and David Bowie is brilliant and so unique. The guitars and keyboards are so meticulously performed, adding to the song’s character and mood in a marvelous way. This is definitely a highlight of ‘Gone to Stay’! Peer Stappe and Fredrik Bergenstråhle are doing a great job all the way behind drums, keyboards and bass, with Peer also on backing vocals on several occasions. They both contribute and add to the solid and compact character of this new album, perfectly matching Norum and the other contributors. Other contributors? But of course! There are a few guest musicians playing on this album as guests, on almost all ten songs: Åge Sten Nilsen, Fredrik Åkesson, Mats Shubert, Kelly Keeling, Mic Michaeli, Staffan Astner, Joakim Svalberg, with whom John Norum has shared in the past somehow musical interests, have played together, been in the same band/album, or just have been friends, etc. I should not forget the Stockholm Philharmonic Orchestra, which appears on ‘Norma’, a high-quality addition making the album more prestigious and noteworthy. Another notable moment of the record is the closing track, ‘Face the Truth – revisited’, a cover version of Norum’s track back in 1992, with Glenn Hughes. Maybe the first version of early 90s had dazzling guitars, heavy and fast riffs, however this newer version has Norum on vocals, slow pace, a mellow and more sentimental mood, but is very interestingly done. By listening to it at first, only the vocals can remind and bring back the notion of the 90s version (the chorus of course), the whole way it is played and presented is very very different. The solos and leads are beautifully added and constitute a really charming track. Brilliant idea! ‘Gone to Stay’ brings back very nice memories from Norum’s brilliant career over the 35 years of his solo music journey, featuring all the elements and the reasons why we loved his charismatic music style, emphatic vocals and superb songwriting. He has been not only an amazing guitar hero for the generations to get inspired from, but a complete, exceptional and fascinating musician, songwriter and performer.