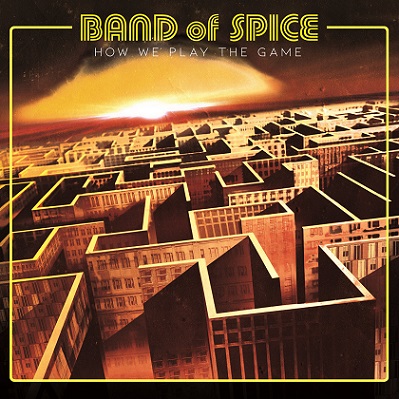 Band of Spice releases its new exciting album “How We Play The Game”, and it’s a pretty much convincing title, which represents what this album stands for. The power trio of Spice, Ruben and Saso (Christian Sjöstrand, Robert Hansson and Alexander Sekulowski) are of course no strangers, as they have collaborated under different bands for almost over twenty years. And this is among their strengths, which definitely shows up again in “How We Play The Game”. Like everything in Spice’s music journey, this is another personal testament, a reflection of what really happens in his mind and soul. This is an album with a clear direction towards a more ‘heavy-metal’ sound and not so much the heavy rock/bluesy character of - especially - the early days of Spice and the RJ band for example. The guitars are well polished, the overall sound is harsher and absolutely more ‘metal’. The tracks are not short in duration, yet, they never get you dissatisfied or tired in any way. With ‘My Regime’, Spice introduced us to his more thrashy and extreme side, as an extension of Kayser of course, but with a different lineup and a more extreme – Slayer like – sound. On “How We Play The Game”, he seems to balance himself between the two poles, heavy metal and heavy rock, without compromising anything at all on quality, his trademark songwriting and lyrics, and of course his passionate and exciting performance. His own way to deliver the goods is direct, straight forward, something, which contributed a lot to his loyal fan base. What must be humbly noted at this point is that - not the most accepted parallelism - this album brings to my mind Megadeth’s “Youthanasia” back in 1994, a musically diverse, both slow and fast tempo album and a progressive record with a similar overall approach. Please, don’t get me wrong here: what I am trying to say is that “How We Play The Game” has a very similar approach on how it can be both heavy metal and more ‘traditionally rock’ … Saso and Ruben form a very nice rhythm section which adds up to the solid and very compact setup of the whole album. They have achieved to play and sound like the same band for ages, and on a continuous pace, without leaving any doubt at all. Of course, I love the crunchy and harsh guitar sound, not only on the fast paced passages, but also on the mid-tempo ones, where we realize one more time, how good guitar player Spice is, among other things. Personal favorite tracks on the record are: “Gone Insane”, “Demonized”, “Below the Sun” and “A song for you”, however, the whole album is really good and fun to listen. Tackar Kryddan!