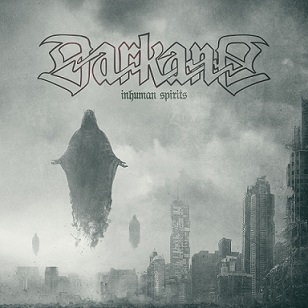 Darkane are one of the countless Swedish bands that emerged in the melodic death genre of the country during the 90s. Formed by guitarist Christofer Malmström and drummer Peter Wildoer in 1998, when the forerunners of the scene had already established themselves, the band based their work on familiar Swedish melo-death, using ample thrash elements, especially during their earlier years, and occasional symphonic interludes (orchestras, choirs, synthesizers).

Darkane showcased a more aggressive attitude in their first albums, and later they incorporated a rather modern approach, mainly influenced by bands like The Haunted and Soilwork. Despite their efforts, they didn’t succeed in placing themselves among the most prominent bands in melo-death universe. The reason was simple enough: Darkane’s songwriting never enabled them to attract a wider audience. They just offered the basics, without standing out in an over-populated scene. That alone, given the saturation of Scandinavian melo-death, suffices. Therefore, it was a natural occurrence for them to enter a long period of inactivity after their sixth album, “The Sinister Supremacy” (2013). Since then, nothing became known about them (even their core fans may have deduced that the band had quit).

Surprisingly, Darkane decided to return after nine years with “Inhuman Spirits”. Therefore, a natural curiosity arose regarding the band’s sound and direction after so many years. First of all, the new stuff has little in common with the first three ferocious, thrash-oriented albums. Darkane showcase clearly a melo-death facet (that’s their base), without neglecting their thrashy character though.

The band have given enough space to aggressive, melodic riffs -both traditional/straightforward and dissonant- that look into their past, and simultaneously have a more modern feeling. Besides that, their familiar thrash emerges timely, involving up-tempo patterns and Mackrory’s clean vocals, forming that particular character you’re already aware of. Of course, Wildoer’s skillful drumming is omnipresent, diversifying accordingly in each track. All these, make “Inhuman Spirits” a sonic representation of grimness: pessimism and sullenness prevail in every track, as Darkane use appropriately their elements. They were always dark and greyish, and they still are.

Let’s be honest: the album isn’t remarkable in its totality, since on several occasions songwriting becomes rather ordinary, but there are cases that deserve your attention. The self-titled opener, using keyboards to form a rather grandiose soundscape, sets the tone with its melodicism, technicalities and overall aggression. “Awakening” has a heavier, sinister approach, through deep growls and relevant motives; but even in this harsh environment, Darkane have available space for a classic metal solo. However, the main points of interest occur later: the dynamic, full of power “Mansion of Torture” combines a thrash theme, a well-written, addictive melodic pattern, and a successful orchestral outro, while the slower and darker “The Quintessence of Evil” excels in interchanging rhythmic and melodic parts, shining grimly through a catchy refrain.

Unluckily, we don’t meet the same standards in the whole album, since there are tracks that, without being necessarily bad, fail to offer a “spice” that would attract the demanding listener, tempting you to press the next button. The fatigue of the ear appears often, like in “Conspiracies of the Flesh”, “Inhaling Mental Chaos” and “The Great Deceiver”, songs that doesn’t offer something peculiar. That lack of dynamism definitely lessens the listening experience.

“Inhuman Spirits”, despite its ambitious intentions, since it was created by an inactive band for nearly a decade, is simply satisfying. It hasn’t the potential to place Darkane in a prominent position in the genre or expand their fan base. Of course, its attributes regarding the co-existence of death/thrash aggression and “grey” melodies are undeniable and will be appreciated by the band’s existing followers; but these facts don’t suffice to make “Inhuman Spirits” a notable case.