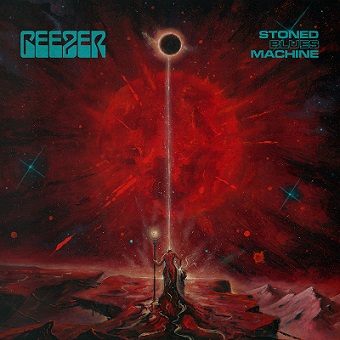 Since their formation in 2013, Geezer, the heavy blues/psych/stoner trio from Kingston, New York, have carved their own way through classic rock and blues territories, psych/spacious semi-improvised experimentations and fuzzy grooves. Although they emerged in the US underground less than a decade ago, their significantly changed sound indicates a journey unrestrained by any kind of self-inflicted boundaries; a journey in search of the proper vibes, that would fit in perfectly with the band’s long-established habit of jamming.

Biblical Pat Harrington (guitars/vocals), Geezer’s founding and song-writing force, already long-experienced in the American scene, grasped almost instantly that 2013’s blues & boogie-oriented debut (“Electrically Recorded Handmade Heavy Blues”) was just a starting point; there was considerable potential ahead for expansion/exploration. A year later, in “Gage”, we experienced a heavier/psych sound, under the prism of unselfconscious psychedelic, spacious improvisations, that would become Geezer’s trademark since then. As Pat left aside his slide guitar, the band progressed and matured further in their self-titled album (2016) and “Psychoriffadelia” (2017), flirting with astral, stoner fields and offering more open-spaced, heavy blues memorable jams. Geezer’s journey reserved another redirection in “Groovy” (2020); as the title suggests, we receive more heaviness and fuzz through hypnotic, groovy themes and increased doses of psychedelia. “Heavier, trippier, groovier”, as dear Pat commented.

This year’s “Stoned Blues Machine”, Geezer’s sixth LP, and the second via Heavy Psych Sounds, comes to expand further the fuzzy, groovy sound that we heard in previous releases. However, the band changes their approach. The new album emphasizes on Geezer’s heavy rock/stoner idiosyncrasy, enriched of course by their familiar bluesy essence, and leaving aside their more psychedelic aspect. In this respect, the band’s willingness to jam is restricted here; it’s somewhere there, but rather concealed. You simply get the fuzzy rock you adore (Brant Bjork is omnipresent amongst Geezer’s influences) under a southern perspective; it’s what you love to hear while chatting with folks at a local bar, or at a campfire during night times, and narrating stories.

“Stoned Blues Machine” has a straightforward, openhearted rock attitude, without elaborate structures, engaging you with plain, but essential fuzzy themes, and Pat’s whiskey-soaked, as-hoarse-as-it-should-be voice. HPS’s production brings out Geezer’s vintage character and glimpses of 70s’ classical aura, without sounding so much retro. You hear an amusing album; but the main factor that triggers your amusement is the evident chemistry between Harrington, Touseull (bass) and Markota (drums), in their third year together. You just have to listen to this well-connected, experienced trio performing precisely and cohesively.

Memorable rock patterns engage you honestly. The warm opening of “Atomic Moronic” with its classic heavy rock motive cannot leave you apathetic. Similarly, the Sabbathic intro and the subsequent galloping pattern of “Logan’s Run” greet you pleasantly, probably at the most addictive track of the record. But how can you ignore the energy and vitality released by the uptempo “Broken Glass”? On the other hand, the catchy “A Cold Black Heart” attracts you with its elegant groove that “talks” directly to your subconscious, spacey sounds and leads; that’s a song that makes you “travel”, being terrestrial, then sending you to the astral level, and finally returning you to terra’s safety.

As I mentioned earlier, “Stoned Blues Machine” is not so much experimenting in terms of psychedelia. If you’re looking for such trends, please refer to the self-titled album of 2016 (my personal favorite), when Geezer unfolded at greater extent their musicianship at different levels. Here, the band’s tripping out essence emerges only in “The Diamond Rain of Saturn”, which -purposefully selected as the closing track- functions as a “connector” of a fuzzy environment, a spacey soundscape and bluesy aesthetics; that’s probably the most “adventurous” idea that we come across.

Overall, “Stoned Blues Machine” excels in revealing Geezer’s heavier, stoner face. More terrestrial than spacey, more mature and tighter, it’s an amusing addition to the band’s evolution. Bear in mind that the term “evolution” isn’t used randomly here: in less than a decade and after six albums, Geezer still evolve, being in good momentum with energy and sincerity. However, pay attention: although Geezer, in their recent works, show a heavier and groovier personality, their heart remains the blues. Listen to “Stoned Blues Machine” carefully: under all the fuzz, Geezer’s heart still smiles discreetly.