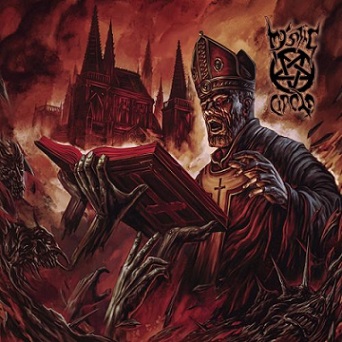 Well, it may seem weird, but Germans do have presence in the black metal genre. Mystic Circle from Ludwigshafen formed in the distant past thirty years ago, and since then followed a parallel route to Scandinavian and Greek acts. I admit that I wasn’t aware of the band’s existence until the day I was assigned to write this review. Hence, that was a good opportunity to become familiar with their history, before proceeding to their new album.

Mystic Circle formed by Beelzebub (vocals, bass) and Blackwar (drums) in 1992, playing initially death metal, but soon changed their direction to the melodic form of black metal, with a new line-up. After their third album, “Infernal Satanic Verses” (1999), Blackwar quit, and the subsequent years they incorporated death elements into their music, until Beelzebub ended the band in 2007. Sadly, Mystic Circle relied excessively on their influences (Limbonic Art initially and Dimmu Borgir, Deicide, Gorgoroth, etc. later on), without developing their own ideas and offering something different; therefore, I cannot claim that I liked what I heard from the first era. Until their split up, they had released seven rather mundane albums, with bad or mediocre songwriting. Hence, disbandment was the best decision they could make, since there wasn’t any real creativity and wide recognition till then.

Surprisingly, after a long hiatus the two founding members decided last year to reform the band, with the intention of releasing a new album. Judging from what I had already listened, I prepared myself for the worst-case scenario. Luckily, I was partly disproved, as it turned out that things weren’t as bad as I expected them to be.

When a band entitle an album their own name, they try to declare who they really are, and reveal their inner self to the audience, especially after many years of absence. In Mystic Circle’s case, their eighth eponymous album has little in common with their most recent work, “The Bloody Path of God” (2006) since death elements aren’t so widely used. Instead, it’s regarded as a continuation of “Infernal Satanic Verses”, based on the 90s’ melodic black metal according to the standards set by acts like Dimmu Borgir or Cradle of Filth.

“Mystic Circle” encompasses a twofold influence from the Scandinavian scene. Throughout the album you can hear typical Norwegian storming patterns and outbursts in up-tempo songs. However, the Germans emphasize clearly on the melodicism of the Swedish scene (especially during refrains), while they try to make their music more sublime and impressive through the addition of keys and some atmospheric parts.

Despite my initial negative stance on the band’s previous works, I’ll try to be as fair as possible: “Mystic Circle” has more intriguing and straightforward patterns and melodies compared to the mediocre past albums. This time songwriting is improved, indicating a band who has worked better, supported by Atomic Fire’s modern production that makes every sound perfectly sharp. Actually, I talk about the first -and only- Mystic Circle’s album that I can hear from start to finish without forcing myself. The band retain their dark, evil essence and aggressive sound, composing dynamic, ominous melodies that probably you’d like to sing along (“The Arrival of Baphomet”, “Letters from the Devil”).

However, the aforementioned improvement doesn’t mean that the album “works” optimally. Mystic Circle didn’t reach a quality level that would allow us to talk about a fully transformed band. There are cases where songwriting remains weak, failing to keep you attentive, while some parts sound very common, without being bad of course. Also, a noteworthy drawback persists: Beelzebub’s vocals sound rather forced, and occasionally caused me annoyance, thus diminishing my listening experience. With a different vocal approach, some ideas could work better.

At the end of the day, a simple question arises: Is the new album able to make you stick with it on a long-term basis? Well, I don’t think so. Of course, “Mystic Circle” is undoubtedly more appealing, but not to the point of making the difference out there. You see, even after so many years, Mystic Circle still cannot develop their own identity. You hear their stuff, but you cannot say “This is Mystic Circle”; instead, you shall probably say “It sounds like Dimmu Borgir or Cradle of Filth” (or any other band that uses melodic elements). Without a distinctive characteristic, it’s difficult for a band to gain access to a wider audience and remain at the foreground.

“Mystic Circle” might concern the ears of fans who tend to this kind of black metal; but even them, sooner or later, will “return” to the bands that create the trends, due to the lack of Mystic Circle’s identity.