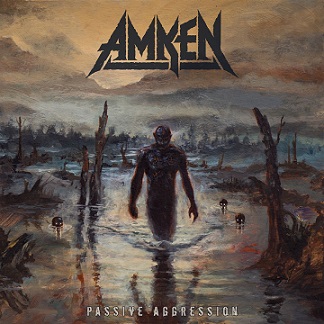 Soon after the release of their debut album, “Theater of the Absurd” (2017), AMKEN was distinguished as one of Greece’s most promising new thrash metal bands. They had the sound, the confidence and the guts to stand out from the rest and become a new force in the Greek extreme metal scene. Now, five years after this fine debut, AMKEN is back with its sophomore album – the big question is, will this second album be better than the first one? Well, even though the bar is set very high by the band itself, AMKEN manages to avoid these questions and answers – they simply set the bar even higher! Yes, the quartet has evolved and with an open mind and heart, has produced a serious work of thrash metal art, without self-limitations, without compulsive musical behaviors, without fear and clichés. AMKEN has progressed into a thrash metal beast, which is at the same time brutal, massive, yet punchy, catchy, even melodic and epic! This Greek force knows how thrash metal is played and succeeds in sounding old-fashioned and modern. Also, they have the talent to compose complex songs, which at the same time are based on some simple ingredients – sharp, riffy guitars, a super-heavy rhythm section with blast beats and an incredible groove, and of course, violent, rough and harsh vocals. All the songs of these thrash metal jewel have a huge impact on the listener, who understands that there are no fillers in “Passive Aggression”. My favorite songs are “Underdogs”, “I am the One”, “Passive Aggression” and “We Came For Nothing”, but hey, … I could name all the songs of the album! AMKEN has found the passage to a dreamy thrash metal dominion. With “Passive Aggression” they conquer and rule, feeding us with orgasmic thrash m,5/etal anthems! AMKEN is here to stay!!