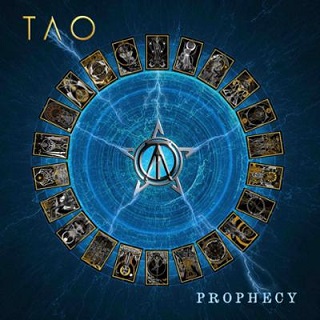 This band is a surprise! Who knew that this debut album, “Prophecy”, would turn out to be a ... “prophecy”? They also give good vibes - what better name for a band than TAO? Despite the name, the band is based in England, Scotland and Wales. They are the living proof that melodic hard rock, from the 80s and from the UK, is alive and kicking. “Nobody But You” is the first track. Chris Gould (ex ‐ Serpentine) delivers some wild guitar lines. So wild, that it can speak. The shred is crazy ... and the solo - I can see this man on his knees doing it! Karen Fell has a passionate voice! “Rock Brigade” starts with drums that resemble a march, played by Brian Webster, one of the additional musicians, and something will start soon. The guitar begins so softly, followed by Karen angel voice. Darrel Treece‐-Birch (member of the band TEN, another additional musician) plays the keyboards, which give a futuristic vibe to it and an awesome atmosphere. Chris Gould transforms his guitar lines into something crazy and wild. Chris and Darrel Treece-Birch are pure geniuses on this tune. One of the most beautiful songs of the album, “Angels And Clandestine Fools” starts with a refined piano key section, that combines with the singer’s voice. Next stop, drums and guitars kick in. This one has a Heart influence on it. It ends like it starts. It’s the most romantic song of the album. But he next one, “Breathe In, Breathe Out”, is unique, with its futuristic and 80s sound, specially on the keyboards. “Fire In The Sky” begins with a vocal array and a drum beat backs everything, before the guitars come and play a riff, which mirrors the singer’s vocals and melody. The choruses are layered by bass lines, played by Dave Rosingana, keyboards and guitars. “Might Just Break Your Heart” has a flurry piano introduction, followed by bass overlays, that give some depth to it. After that, the chorus begins, it has a “Three Musketeers” vibe, which is interesting! Another guitar solo is heard in-between, that provides a good rhythm pattern, the arrangement of this power ballad is amazing!  In “Prophecy”, Gary Hughes (lead and backing vocals, programming, guitars, mastermind of the band Ten, writer and producer of “Prophecy”) plays the keyboards and sings with Karen. Piano layers bring new horizons to this “theatrical” song, before guitars, bass and drums come to stay. Very interesting, and my favorite! “Fight Club” has a light, paced keyboard, “Nazarene” has a “You Give Love A Bad Name” vibe and reminds us of the more commercial sound of that period. “Gone Forever” is like the introduction of a musical, it is another ballad. It’s clear that Karen can reach higher notes, without any problems. The album ends with a reprise of “Angels and Clandestine Fools” (no backing instrumentation here, just a piano and a layered synth), a nice way to finish the album! TAO have conquered all their fans and the rock n’ roll industry. They sure deserve this success and it’s great, when new bands appear. Hope to see them supporting a big one.