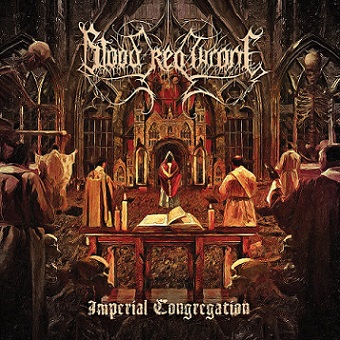 Don't be fooled! Norway doesn't produce exclusively black metal! Blood Red Throne from Kristiansand specialise in the traditional death metal that we grew up with; that rotten, brutal sound that gives pure amusement, without elaborate experimentations. More than twenty years have passed after their formation, and the band always release decent records, honouring the genre, the fans and (of course) themselves.

However, no matter their stable quality standards, Blood Red Throne never achieved a wider recognition that they supposedly deserved. According to the band, Død, their mastermind, was looking for a good contract for some years. Eventually, they drew Nuclear Blast’s attention and “Imperial Congregation", their tenth album (this number allows us to call them “veterans"!), is their first work released through this well-known label.

Blood Red Throne has taught us all these years what to expect: death metal in its purest form. If you’re fond of experimentations or significant changes in sound, then you should look for other bands; Blood Red Throne aren’t one of them. In this respect, there aren’t hidden surprises in “Imperial Congregation’’ (at least, not momentous deviations from what we already know). Once again, they deliver their traditional, decent-to-the-maximum death metal, that some of you may associate with Cannibal Corpse.

The album flows with classic brutality and well-crafted, addictive and occasionally groovy riffage, that -besides its familiarity- prevents you from pushing the “next” button (and in the end, riffs remain in your memory). Blood Red Throne focus mainly on mid-paced tracks with many appealing rhythmic parts and stormy drumming, where the cornerstone is -of course- Christiansen’s extremely deep, “stinky-well-ish” growls. Bolt is significantly responsible for the band’s bloodiness, giving us pleasure with his “directly-from-the-gutter” brutality, and some occasional high-pitched black metal strokes (when he has the “space” he needs).

The album grips you firmly from the very first notes of the homonym opening song. Actually, the starting riff certainly brings in mind the insanity of “Affiliated with the Suffering”, being similar to that notorious track from the past, but you succumb instantly (and willfully) to its vehemence. It’s natural to think that some Død’s and Meathook’s themes are in fact “deja vu” patterns, but this isn’t bad. You cannot blame them for atavism; after all, the way they use classical ideas, in conjunction with elements like a more technical perspective, timely breakdown parts and solos, is almost exemplary. I could describe “Imperial Congregation” as a classicism that glances discreetly at melodicism. But don’t “adjudge” hastily; melodic patterns of heavy metal origins amidst unholy surroundings enrich songs and enhance the listening experience, without altering Blood Red Throne’s bloody temperament. You cannot ignore the leads in “Conquered Malevolence”, “6:7” or “Hero-Antics”; all of them have their purpose.

I think I can “forgive” them for some modernisms in “Inferior Elegance” that aren’t much compatible with their character. However, even in this “weakness” you find evidence of carefully woven work. And that’s the exact word that describes Blood Red Throne’s stance towards the genre: “work”. How is it possible to stay untouched by the variety of themes in the staccato-infused and somehow technical “Itika”, the death galloping of “Hero-Antics” or the ambitious and slightly epic “Zarathustra”? Blood Red Throne, either in dynamic, straightforward songs like “Conquered Malevolence”, or in slower, doomy conceptions like “Transparent Existence”, are pleasurable.

In simpler words, Blood Red Throne, having restricted themselves to predestined musical frames, play the death metal you want to hear. “Imperial Congregation” is another high-quality addition to their discography, satisfying you with its cohesion and old-school feeling; of course, similarities do exist, but in no way disturb you (actually, you may find that it’s “richer” in ideas than you originally think). For more than twenty years, these Norwegians were the upright, (un)recognizable workers of death metal. It’s time that the prefix in parentheses should be removed. Their Bloodesty is essential for the genre.