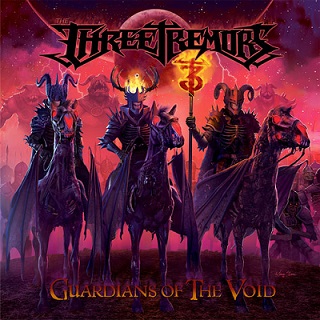 The Earth isn’t the same after this release. Their debut album, released in 2019, was very successful and gained positive reviews, but this one is much better. Tim Ripper Owens, Harry “The Tyrant” Conklin and Sean “The Hell Destroyer” Peck have made true heavy metal and covered all their characteristics. “Guardians Of The Void” is the name of this sophomore album. “Bone Breaker” opens the LP with a splendid iron fist and metal voice dynamics. What a brutality!!! “Guardians Of The Void” is the album’s title track. It is a higly velocity tune, with double-bass drums and impatient guitars, that will make the fans wanting for more. And what a crazy bass line. “Kryptonian Steel” is a kick!!! Aggression, high speed, thrashy, powerful and full metal is how this song should be defined. These guys are going beyond the limit with this one. A mid-tempo track of pure heaviness. Then, with “Crucifier”, we have a very on point song. These guys are not a normal band, but a supergroup and can’t be stopped ... “I Can’t Be Stopped” returns with an early aggression. It’s a traditional tune of metal and power, it goes full steam ahead. “Frailty” is a masterpiece in harmonies,it sounds like ‘May The Force Be With You’, a very barbarous song!!! “Operation Neptune’s Spear” is a terrific, galloping, aggressive tune. Once again, the band switches tempos and we hear it on “Chained To The Oar”. It turns out to be the most melodic track of the album. If you expect it to be 100% romantic, you’re wrong. “Catastrophe” is half classic metal, half thrash metal, something you can hear it on the entire album, but we can hear it mostly on this one. It has a Megadeth influence in it.  Three songs are left and the senses are high up. “Wickedness And Sin” is another slap of metal treats. It increases greadually the furious gallop. “The Fall Of Rome” comes with aggression and features amazing vocal performances. And the last one, “War Of Nations”, combines elements of thrash metal with aggression and heaviness. A superb metal album from a metal supergroup, that everyone must own!