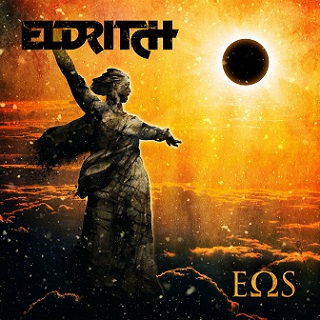 Eldritch, the Italian progressive/power metal band, has released “Eos”, an album named after the Greek goddess of the dawn. Their name may be almost unknown to the average metalhead, specially the younger generations, but if you lived in the ‘90s, you will probably remember them. They’ve also toured with Angra, Andre Matos’ band, while they were promoting their masterpiece album, “Holy Land”. The Italians have eleven official albums and have been veterans of the progressive metal sound, since 1991 - they went full speed with success along with “Seeds of Rage” album. As far as the lineup is concerned, Alessio Consani was replaced by Dario Lastrucci and Oleg Smirnoff (keyboards) is back ... The main songwriter and guitarist is a pure genius! Period! And Eugene Simone is a poet ... The intro “Dead Blossom” is very futuristic, a synthesizer gem, sounding like King Crimson and combining electronic sounds. You can hear colors. “Failure of Faith” comes at full throttle. Eugene Simone and Rudj Ginanneschi play an aggressive, fast tempo, with a thrashy guitar sound. This song has also a ‘70s Genesis vibe, specially the keyboard elements. Love the arrangements that Raffahell Dridge has put on the drums, along with the guitars and keyboards. All these elements, the odd rhythms, the guitar melodies, give unexpected chills and feelings. “Circles” can be a surprise, since an upbeat of electronic sounds starts. It’s a stunning tune with heavy riffs and drums, that makes you wanna headbang. With a classic vibe and sound, with strong basslines, here is “No Obscurity”. The longest track of the album is “Sunken Dreams”. It’s worth a listen and is worked and built upon the keyboards. The guitars were like they were conducted by a maestro! Terence voice is once again amazing. It sure sounds like a dream!!! “Fear Me”, with its very modern keyboard elements, sounds like the ‘90s, it is an elegant song. No power metal band can forget a ballad: “I Can’t Believe It”, which has an approach to the ‘70s. “The Awful Closure” has beautiful melodies, guitar work and solos. The title track is a perfect song and finally, the last tune: Bon Jovi’s “Runaway”, which is a tribute to the keyboards, but also adds a flavor and something of Eldritch’s own sound. “Eos” is a great album and brings new elements to the power metal universe, that the fans wanted and desired for so long. It brings out the best out of the band and one can rely for some classical, progressive elements.