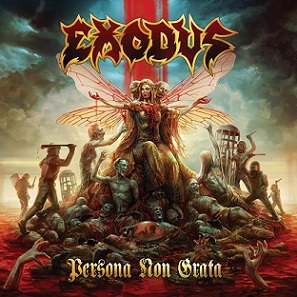 The latest album of Exodus (“Blood In, Blood Out”) was released seven years ago and all fans of the American thrash metal veterans were waiting anxiously for a new record – this new record is now released under the title “Persona Non Grata”! It is the second album with Steve “Zetro” Souza after his return to the band  and I would say it is one of the best albums with the seal of Exodus. Whatever the fans wait from Exodus can be found here: crushing guitars from Gary Holt and Lee Altus, explosive drums from Tom Hunting, rough vocals, all lead to an enjoyable result both for the older and the younger metal fans! “Persona Non Grata” is a must-hear album, as the band has managed to transform its incredible song ideas to complete, consummate compositions, which will surely lead to continuous headbanging and frenzied mosh pits! If someone asked to select my favorite songs form the album, I would be confused, since all songs have something special to say – OK, my favorites are “Slipping into Madness”, “Prescribing Horror”, “The Years of Death and Dying” and “Lunatic-Liar-Lord”! As a total, “Persona Non Grata” has everything that a thrash metal album needs – a delirious fast-tempo, a lot of sharp riffs, fiery and crzay guitar solos, catchy melodic hooks and manic refrains, a compact rhythm section, everything coming from the burning heart, delivered with passion and soul. In a few words, Exodus did it again – they have given us a thrash metal gift, which will surely be appreciated. And when the Americans get back on tour, I am sure several tracks from this new album will be performed.