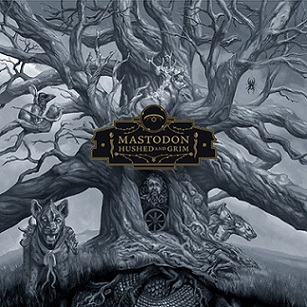 No matter if we like them or not, we must agree that Mastodon have shaped their own sound and that they have released some important albums. Their personal experimental, progressive metal style has a lot of fans and now, “Hushed and Grim” comes and makes me a Mastodon fan too. “Hushed and Grim” is an unforgettable, exquisitely beautiful artistic adventure, which will convince even the doubters. You don’t just listen to this new album, you live it, you experience it. After the shock of the first two-three listening sessions, you will understand what is going on here. I would liken “Hushed and Grim” to Pandora’s Box – you open it and a cosmos of sounds, pictures, emotions and colors come out! Compared to the previous works of the band, this new album is simpler, more catchy, emotional, straightforward, atmospheric and melodic. I believe that Mastodon have matured enough to present us one of their most complete albums, a modern progressive metal opus, which will talk to your mind and heart. This “new” direction is also owed to the cooperation with producer David Bottrill, who has worked previously with such artists as Muse, Tool and Rush. “Hushed and Grim” is an artistic triumph, as Mastodon succeeds in creating truly interesting heavy music, which sounds so sophisticated, delicate, passionate and majestic. It is a long album, however, it never gets tiring, it just gives you more and more things with every listening session. So, if you are a Mastodon fan, you know very well that your favorite band released an amazing album. And if you aren’t so familiar with Mastodon’s sound, this album will be an apocalypse for you!