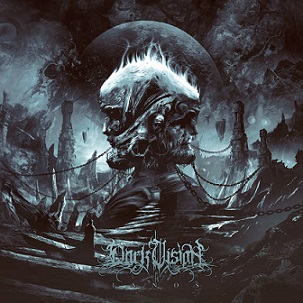 I’m sure that many of us have forgotten (or may be even unaware of) Dark Vision, a Greek band formed in the distant 1996 by Giannis Konstantakos (drums). They were a promising black metal act in these days, but their selective and extremely rare discographic presence made us lose their trails. Their debut, “Full Moon Shines”, released in 2002, heavily influenced by Rotting Christ’s, gothic/romantic experimentations, was rather mundane, with some scattered intriguing ideas.

Since then, the band released three EPs, showing a different direction. In “Bestial Remedy” and “Ingrowth” they imbued their music with death metal territories, making their compositions more “adventurous”. Indeed, this mixture of a rather blackened death metal seemed to fit them perfectly. After many years of inactivity, their orientation changed again in “Gruesome Tide” (in 2019) to more traditional black metal forms, bringing to mind pioneers from Sweden and Norway (the cover of Bathory’s “Raise the Dead” was indicative of Dark Vision’s intention). After these intermediary signs, time was proper for them to settle their ideas and influences and release a complete work, almost two decades after their debut.

In “Ianos”, what you first appreciate is Giannis Nakos’ work on the album cover (Remedy Art Design), a nightmarish depiction of a double-faced Ianos (the Roman god of transitions, usually depicted at crossing points like doors, gates and bridges). In this album, a more melodic face of the band comes to light, since Dark Vision draw inspiration from bands like Dissection and Watain, using hoarse vocals that lie on the verge of death metal though. “Ianos” is an endless succession of different themes, carefully structured and cohesively connected with each other.

I mentioned earlier that Dark Vision made their music more diverse in the EPs that followed “Full Moon Shines”. But now, their approach has a worth mentioning theatricality. The band’s black metal, pervaded by a mysterious, atmospheric darkness, serpentines through countless turns, narrating a dystopic story about the struggling effort of the soul that unfolds its chapters gradually. Dark Vision’s evolution towards maturity and confidence is noteworthy; and this is exactly the point of excellency of that album.

Pay attention to the impetuous attitude of “Absurdity in Abyss” and the grandiose essence of “Cosmic Storm”, where the narrative intro in Greek, the sequence of riffing themes and the majestic solo of the last part constitute probably the peak of “Ianos”. A more old-school aura, common in Greek and Norwegian bands, pervades “Of Unknown Artist” and “Gruesome Tide”, two tracks included in the previous EP. Even the cover of Christian Death’s “Deathwish” may take a toll on your attention, despite its straightforwardness, giving off a sense of familiar romanticism.

Undoubtedly, the enthralling, gloomy riffage that reveals unexpected, appropriate twists, pointing out the band’s technical progress, combined with Giannis’ respective approach behind the drum kit and Mark’s hoarse vocals, form a fitting and captivating bond, where at the very bottom, the beauty of the Hellenic scene arises. “Ianos”, balancing on the border of Scandinavian and Greek black metal, with strokes of death and heavy-metallic melodicism, was -until now- a well-kept secret. Let’s spread the word about it. Dark Vision may not be the most prolific band in terms of discographic presence, but it seems that they used their time wisely; and in our years, wisdom is bliss.