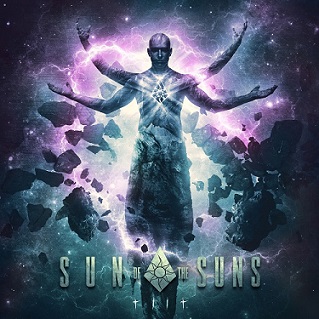 The road to prominence that a band have to follow within the deathcore genre may not be easy, given that may acts out there sound alike. Newcomers should do something really outstanding, that would enable them to gain wider acceptance. However, what we call “outstanding” (let alone “innovative”) isn’t easily achievable in our days, especially in that particular genre. But let’s talk about (and welcome) a new entry and see what they have to offer.

Sun of the Suns from Italy was formed four years ago, by Luca Scarlatti (vocals), Marco Righetti (guitars) and Ludovico Cioffi (guitars). Recently, their debut, titled “TIIT”, released through Scarlet Records. “Tiit” is a term referring to the human DNA; hence, the album conveys the band’s concerns about creation, evolution, science and religion (in a sense, through their lyrics they denounce dogmatism). Similarly, the spacey aesthetics and colorations of the album cover are appealing to the eye, intriguing you to explore the musical content.

After the electronic/ambient instrumental intro, the band unveils their furious attitude without restraint, playing the typical, modern deathcore, under a rather progressive approach. Their patterns, whether mid or up-tempo, fill the space dynamically with traditional, deathcore heaviness. A storm of violent riffing, supported by tones of blast beats and high-precision drumming smashes your ears. At certain parts, basslines become devastating, concrete. Familiar, recurrent sharp riffs, used by most bands, occur regularly in many songs. All these must-have elements are offered abundantly.

It’s obvious that the Italians dedicated a lot of effort in their technical perspective. Many riffs are more “difficult”, requiring skillfulness and precise execution, while the band shows fluency in interchanging constantly various motives. Despite the overall aggression, the tendency for melodicism is obvious (see “The Golden Cage” and “TIIT”), occurring timely to mitigate the effects of hammering. They aren’t hesitant about adding melodic “bridges”, or short tranquil parts, while the use of keys in the background makes their music more atmospheric, or “space-oriented”.

Scarlatti’s furious, intense, relentless vocals are exactly what a band of this kind need. No comment should be made about a decently angry performance, but I think there was allowance for further experimentations with different types of growls, like in “I, Demiurge pt.2”.

Sun of the Suns give the impression of a cohesive, tightly connected band, who have worked many hours in the studio. Of course, their performance is properly accented by the production team, who have given “TIIT” that instantly recognizable, modern deathcore sound. Indeed, you can hear everything perfect, in a crystal-clear totality. However, a major drawback prevented me from appreciating the album further.

Sun of the Suns, despite their technical abilities, rely excessively on predestined paths, without adding something that would make them notable out there. They develop ideas that seem to repeat themselves, thus making “TIIT” suffer from homogeneity. The first part is impressive and powerful, but after the instrumental in the middle there isn’t anything new to draw your attention. It’s rather difficult to find a song that will stick in your mind, referring to it regularly.

Of course, “TIIT” in no way is a bad album. It’s a genuine deathcore experience, structured upon the right pillars, and a decent starting point for the band. I’m sure that deathcore maniacs will find exactly what they crave for. However, the band’s future success will depend on whether they will form their own identity or not. They are good musicians and they have the ability to become more intriguing (and not just being followers). Let’s hope they will find their own way.