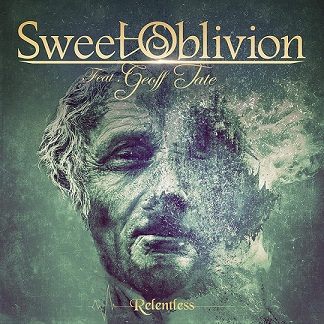 Sweet Oblivion features a numbered cast of artists, selected by Serafino Perugino, Frontiers Records president and A&R head. First of all, there is Geoff Tate, but we also have Aldo Lonobile, who plays the guitars and is the producer as well (Secret Sphere, Timo Tolkki’s Avalon, Archon Angel). Bassist Luigi Andreone, keyboardist Antonio Agate and drummer Michele Sanna are the rest of the team. "Relentless" is the second album of this project (the first one was the the self-titled record, released about two years ago). The album opens with “Once Again Once Sin”, which has that enigmatic sound and environment that captures the listener, created by the keyboards, right at the start of the song. It has a lot of energy, powerful riffs and prog/symphonic rhythms, that remind us of Nightwish. It is followed by “Strong Pressure”. It’s a standout. Geoff’s vocals here are powerful, clear, they suit very well with the instruments (stronger solos and riffs) and have a lot of feeling - never forgetting the keyboards, which are very well structured. “Let It Be” is a more theatrical song, that showcases Geoff’s voice and its potencial. “Another Change” has an ‘80s vibe and feeling, as you may  understand by the music video. “Remember Me” might be the most Queensrÿche song of them all and has something like it was meant for a soundtrack. “Anybody Out There” is the most varied song, it has a grief guitar, it’s quite nice, well written and its keyboard arrangements are amazing, really outstanding - the highlight and best song of the record! Then, “Aria” is totally sung in Italian and was the proof that we needed to see, if Geoff would pass or not. He did it! He totally immerses into the songs, which makes him also a method actor, meaning that he can personify anything with his voice. The song also features guitars from Walter Cianciusi and Dario Parente, who are now also in the “Operation: Mindcrime” live band. “I’ll Be The One” is a beautiful ballad, with an acoustic feeling and a “Silent Lucidity” vibe. Although the previous song is very romantic, “Fly Angel Fly” brings back Geoff’s voice to full circle. Fans of Queensrÿche, and especially the pre - “Promised Land” era will like this album and so the ones who’ve been missing this man’s voice. It’s difficult to imagine these songs being sung by someone else  but Geoff!