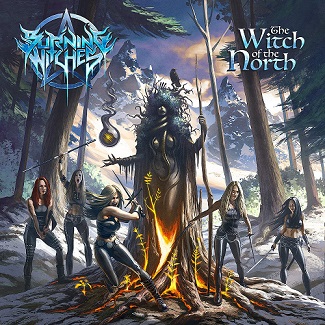 This band is one of the hottest bangers, that came out from the country where the best chocolate is made (Switzerland)! Burning Witches are making a name for themselves and with “The Witch of the North”, they will make it step by step. Winter and forest are the perfect combination for creating lyrics and music. That’s why this album sound so fresh. Thirteen tracks are too short to head-bang. Let’s see why, shall we??? The first one, “Winter’s Wrath”, is like a call for the listener to go and listen to the album. Like a whisper! Clearly it has an Ensiferum vibe to it! “The Witch Of The North”, the title track, begins with powerful riffs, played by Romana Kalkuhl and Larissa Ernst, who replaced Sonia Nusselder. Explosive voice by Laura Guldemond. Man!!! This voice, I think it is amazing!!! Let’s raise those horns for the solo. And the battle scene at the end gives something more to the track.  If you want to know how to play a double-bass in a drum, then learn with this girl: Lala Frischknecht. In “Tainted Ritual” you will learn that, and much more. What amazing skills here, that complement so brutally with the guitar shredding!!! It transcends like a brutal environment!!! “We Stand As One” is the most complete track of the album, it is a sing-along for the fans, with a Judas Priest vibe. “Flight Of The Valkyries” has a slow intro, but then starts its kicking-into-your-face with fast riffing, lots of double bass-drumming, violent bass lines, played by Jeanine Grob. For me, the best song the record!!! “Circle Of Five” could have been written by Judas Priest - the voice, super heavy British steel, guitar riffs with lots of aggression and perfect vocals. “Lady of the Woods” is the perfect ballad, that gives diversity and elegance to Laura’s voice. “Thrall” is a furious heavy metal hymn, with fast guitar riffs, played by Romana, that sound like a flash of lightning. “Nine Worlds” is more dynamic, with aggressive guitar rhythms and cool melodies, it is still faithful to the Judas Priest sound. The outstanding work of Romana Kalkuhl and Larissa Ernst in “For Eternity” is very much ‘80s. In “Dragon’s Dream” we can still hear the good, energetic shredding of Romana Kalkuhl and Larissa Ernst. “Eternal Frost” is an instrumental piece, that leads us to the bonus track: “Hall of the Mountain King” (Savatage cover) ends the album in a brilliant way. It’s a tribute to the bands, that inspired the girls to do what they know best:  TO PLAY HEAVY METAL!!! Burning Witches continue their way to establish themselves into the sacred halls of heavy metal. They made clearly a step forward in their development as a band and especially in their songwriting. The production of the album is excellent. This record is one of the highlights of 2021 so far and the album should be a part of the collection of every metal fan.