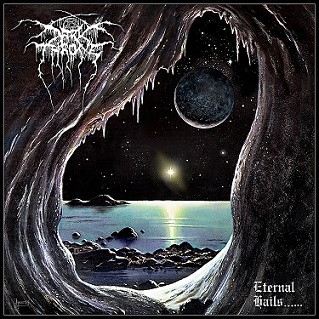 I don’t find any reason of writing an introductory, dithyrambic paragraph for Darkthrone. What reference should I make? Obviously, it would be proper to comment about their pivotal role in co-shaping the second wave of black metal and the path they predestined, where many others strode since then, or -once they sat immovably and haughtily on their dark throne- the personal turn in their second era, when they revealed/expressed their inner, true heavy metal self. But in instances like Darkthrone, I tend to be rather laconic because history speaks itself; their contribution and talent in over thirty years are so unanimously accepted and praised, that written words become rather superfluous.

Hence, I proceed straight to the point. The unflagging duo from Norway released in June their nineteenth album, “Eternal Hails……”. The word “nineteen” may exhort you to exclaim “Wow!”. Indeed, such an extended and prolific discography, with many hidden gems, is seldom encountered. However, despite their long-lasting activity, Fenriz and Nocturno Culto haven’t lost the ability to attract our interest with the quality of each new release, one way or another (and irrespective of the ranking of their albums in the “black-metal-index” that many of us may have in our minds); and that’s the band’s biggest conquest.

The duo in their recent history explore the early heavy metal sound of the 80s, away from the raw black metal for which they are partly responsible for. Darkthrone don’t follow trends, but their own will, proving that they’re no more than genuine freaks of the music they adore. And every time they enter the studio, you know that something good will come out.

“Eternal Hails……” doesn’t deviate from the route they follow. It encompasses elements that we find in previous albums, but the approach now somehow differs. It’s still heavy metal, yet its essence is explicitly doom, through five lengthy compositions, “baptized” into the frozen, black metal aura of “Arctic Thunder” and “Old Star”.  At the same time, the epic element that was dominant in “The Underground Resistance”, now lurks discreetly at the background. It might be Darkthrone’s most cohesive doom work so far, since some samples of “slowdown” attempts are scattered throughout their discography. “Eternal Hails……” is carefully adjusted by its creators, offering plentifully traditional doom riffing, while retaining Darkthrone’s black, cold essence.

Initially, the album cover, Hardy’s otherworldly “Pluto and Charon”, predisposes you perfectly about the content. The dark, ominous, atmosphere that penetrates the album is familiar; you’re listening something that’s raw, primitive and spacey; something you could experience imagining yourself being in the cover’s cave, beholding a distant, cold sun.

The opener “His Master’s Voice” declares bluntly Darkthrone’s blend of Sabbathic doom riffs and primitive black metal. The crushing ending with the dominant, solid bass line is a “foretaste” for the addictive “Hate Cloak”, where riffs emerge directly from the classic Black Sabbath’s or Saint Vitus’ period, sickened by Celtic Frost’s touch. “Wake of the Awakened” stands out with its fast, galloping rhythm and the successful inclusion of synth, that gives a more ritualistic/psychedelic tone among the darkness; but the repetition of some parts might restrict the pleasure level (that’s a minor fault). “Voyage to a Northpole Adrift” is perceived as a return to the current Darkthrone’s status; you should pay attention to the escalating structure and the transitions that lead to the final guitar outburst. In the unconceivable, psychedelic, astral ending of “Lost Arcane City of Uppakra”, the moog synth transfers you to the 70s prog scene; but it’s an alternate scene, where King Crimson wanted to be more distant, spacey and cold. Might that be Darkthrone’s future? No-one can tell, but we can expect everything from this band.

“Eternal Hails……” offers purposefully the familiar, almost vintage Darkthronian sound, away from a processing that could harm the overall feeling. Also, I deem the exclusive assignment of vocal duties to Nocturno as a significant advantage. Nocturno’s harsh vocal performance is absolutely suitable for the album’s desired effect, while Fenriz is better for epic, Bathoric moments.

Despite Darkthrone’s clear orientation to the old-school doom sound, I don’t feel that their core purpose was the praise of their influences. They just want to be themselves, exploring without prejudices territories that they’ve never visited before. Since they’re not busy trying to reinvent the wheel (an achievement they made thirty years ago), they change. “Eternal Hails……” may not be innovative, but excels in cohesiveness and structures, combining effectively black, doom and astral psych vibes. Whether you look for black outbursts or hammering doom riffs, you should be aware of Darkthrone’s decency and exploring nature.