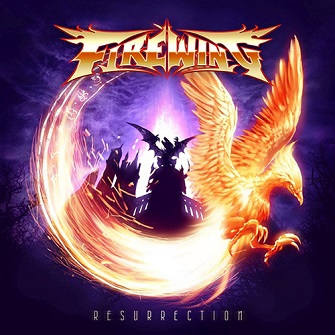 This new album brings a new concept, that mixes technical heavy metal with melodic orchestrations, combined all together with the sonority of symphonic metal. FireWing was formed in the USA, by guitarist Caio Kehyayan, who had graduated from the Berklee College of Music, one of the most renowed music schools of the world. This band is set with Brazilian and American musicians in its formation. Caio has a background in audio production and engineering from Berklee College of Music. He signs the production of FireWing's first album, as well as the songs, lyrics and the entire concept of the work. The story is about two legendary mystical creatures, which are the base of our existence - as you listen to the record, you will find out which they are, it all depends on your imagination! “Resurrection” is very pleasant to hear and is beautiful in every way. It starts with “Prelude: Moonlight Of Despair”, which is an instrumental track, that shows the epic atmosphere of the conceptual record. “Obscure Minds” starts with a kick ass guitar solo, played by the incredible Brazilian guitarist Bill Hudson (NorthTale). Fast and amazing skills are set on the guitars, which provide the best sound for the melodic tempos.  Rapha Dantas (Ego Absence) is the guest vocalist here and shares the task with Airton Araujo. Beautiful keyboards also. The first chapter is where the whole story begins; “Chapter I: Acheron's Ritual” is a short instrumental, that provides with the orchestration and the roars, which will follow in the next songs. “Demons Of Society” starts in a calm way, with keyboards and guitar. A frenetic and angry drum follows, like a battle is set to be announced. There’s another special guest: guitarist Luis Kalil. Can you recall the influence of the power/prog metal band Symphony X here? “Far In Time” has the same structure with the previous one and absorves the melodic lines of it. It becomes more traditional and is the most beautiful ballad the you will ever hear, with Ryan Beevers, who is the guest here on the scream vocals. Ready for the second chapter of your book? “Chapter II: Temple Of Helios” announces it, with another instrumental part. The title track should be a single: guitar riffs very melodics and a powerful voice. “Time Machine”, with Jenn Sakura as the guest vocalist, begins with a calm and relaxed environment on the orchestrations, followed by the guitars, and this ballad turns into an epic. It is one of the singles and was one of the best choices. Ever! So beautiful! “Chapter III: Transcending Souls” is made up of choruses. “Eternity” is more of a power metal song, where the keyboards reign. Here we have, once again, Luis Kalil playing the guitar solo. “Tales of Ember & Vishap: How Deep Is Your Heart?” is very calm, melodic, smooth and delicate. It transcends into a very powerful song, with fantasy world lyrics. Haydee Irizarry (Aversed, Carnivora) shares the vocals with Airton. “Tales of Ember & Vishap: The Meaning Of Life” has more intensity and emotion. Haydee Irizarry is the the guest, but the keyboard and guitar solos are played Joe Atlan and Fabiano Rodrigues. “The Essence Of Your Heart” has an energetic power metal vibe. “Epilogue: Sacred Journey” sounds like if there would be a continuation of this work. We can’t wait for it! It sounds like “Gate XIII” from the “Temple Of Shadows” album by Brazilian power metal band, Angra. For a debut album, it’s well written, mixed and mastered. Amazing!