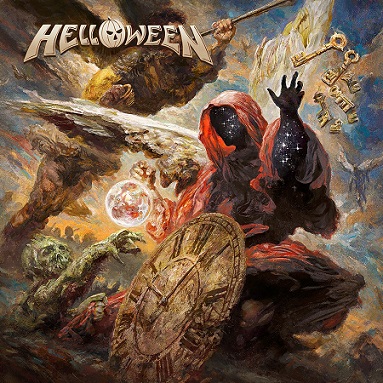 This year turns out to be a good one, despite a world crisis, due to Covid-19. We’re talking about new releases and “Helloween” is one of them. With almost forty years of history, Helloween delivers good quality albums and this one is without exception, good. The self-titled album is the 16th album and is the continuation of their Pumpkins United Tour, which means that it follows the same path. Prior to “Helloween”, Kai Hansen’s last studio album with Helloween is the classic “Keeper of the Seven Keys Part II” (1988) —Hansen was on 1989’s “Live in the UK”—and Michael Kiske’s last album with Helloween is the divisive “Chameleon” (1993), so it’s been a long time since we’ve heard them on any Helloween recordings. If they sound good alone, then they sound even better together ... “Out For The Glory” is the first track and as an intro, it is very catchy and powerful. Then, there come along super fast power metal riffs, provided by Michael Weikath, Kai Hansen and Sascha Gerstner, alongside the mega powerful voice of Michael Kiske. Catchy solos, with fast blast drums by Daniel Löble and fast fingers on bass by Markus Grosskopf. And the chorus! Man! What a beauty! This tune is a killer destroyer! In a good way. What a fine way to start. “Fear Of The Fallen” is the second single and starts with an acoustic guitar with softer vocals, which makes us think that this tune will be a softer one, but it alternates and balances with slow and fast tempos. We can hear how incredible and powerful Andi Deris’ voice is here. “Best Time” is very radio friendly, which is quite nice, due to the riffs and solos. When you think no other track can be more rock’n’roll, powerful, groovy than anything else, than comes “Mass Pollution”. “Angels” opens very softly, but then cracks open between tempos and riffs. It’s very cinematic, yet beautiful, and the keyboards give kind of a fairy tale vibe to it. The duel between guitars and voices in “Rise Without Chains” create a sacred matrimony and elevates the spirit of the listener. If you think you’re “Indestructible”, then think again. This track was composed and made for concerts and festivals. Very well written in every way possible. There’s no space for negative thoughts and Helloween is a very positive band. “Robot King” shows how positive this band is and this is what the world needs right now. This song is the anthem for these years and the next ones to follow. “Cyanide” is very fast. “Down in The Dumps” leaves the harmonics at the highest point, of the tune: riffs, vocals and chorus, drums and bass. “Orbit” is very futuristic. Finally we have the first single and the longest track of the album: “Skyfall”. You cand find the single edit of this song, on the Nuclear Blast Records’s channel, it has all the good elements that the Pumpkins have given us: fast riffs, power metal blasts, speed drumming and powerful vocals. Helloween sure knows how to deliver good content, specially good power metal and after 37 years in the music business, they are stronger than ever and this album is what us fans were waiting for. This is the continuation of the Pumpkins United World Tour and once the pandemic is over, we can’t wait to see them live.

Helloween has just released its new album and all the fans of European power metal are super-excited. However, this is not just another Helloween release, it is the new record of the reunited, the expanded Helloween. Here we have the latest line-up of the “My God-Given Right” album, plus Kai Hansen and Michael Kiske! The dream of every metal fan has come true, since Hansen and Kiske are back to the band! This new album is the outcome of a historic reunion, a great comeback – yes, the Pumpkins are united and we already have “Helloween” in our hands. So, the big question arises – was it worth the wait? Well, from the release of the single “Skyfall” we had understood that something really special was going on in the “Helloween” album. “Fear of the Fallen” came as a delicious foretaste and now I have listened the album numerous times I can finally say: this is a motherfuckin’ masterpiece! Before getting to the music, just look at the fantastic album cover, which is, without a doubt, one of the best album covers in heavy metal history! Fantastic work, already classic! But what follows when you push play is the real deal. From the first track till the last one, you realize that the Pumpkins are in a great shape and in a prolific phase. I had years to listen to such great Helloween songs, to really monumental compositions, which make all the metal fans hysterical! There is so much inspiration in this record, all the tracks are superb, you won’t find any weak moments here. All the members give the 1000% of their potential, the performances are compelling, the passion and the technique will leave you speechless. We have top class music from first class musicians, who play like they did in their glorious past! It is so emotive to listen the vocals of Kiske, the guitar and vocals of Hansen in new Helloween songs! It is like heaven on earth, a heavy metal feast where all angels sing and play! The German masters of power metal present a record, which has elements from all Helloween periods – Kai Hansen era, Michael Kiske era and Andi Deris era. “Helloween” showcases the band’s past, present and future, it teaches how power metal should be played, it sets the new standards of power metal music, it is the power metal album we all were wishing for. The Pumpkins managed to forge a magnum opus, better than ever expected, so unique, really breath-taking. “Out for the Glory” is a hymn, just like the anthems “Fear of the Fallen”, “Best Time”, “Robot King” and “Skyfall”, but, hey, every song in here is a god-damn jewel … Helloween releases a shape-shifting album, an album which works as an example of first-class power metal in the 21st century. “Helloween” is already a classic, a thunderous power metal giving from an expanded band, which is living a second youth. Congratulations!