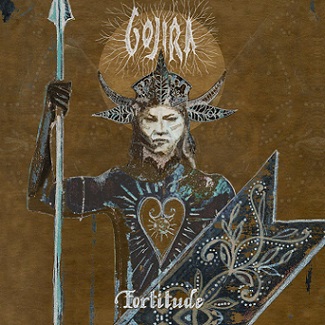 My respect for Gojira is twofold, originating from two of their virtues. On one hand, their unquestionable technical expertise renders each of their albums a guidebook of how modern, progressive, groove death (and non-death) metal should be played; on the other, they are certainly included in the group of the most daring and uncompromising bands. They dare to follow divergent paths, no matter what fans’ and critics’ perceptions are. Musicians should be free to pursue their personal goals and that’s exactly what Gojira do. They spread darkness in “L’ enfant sauvage” and dared even more in “Magma”, five years ago, entering for the first time atmospheric fields and dreamscapes.

Now, “Fortitude” provokes everyone to reshape again his/her previously established views about the band. The album is partially built upon the principles of “Magma”: it’s more “direct”, but still progressive enough. The orientation to more melodic and atmospheric patterns is clear and straightforward.  However, Gojira show a parallel (yet less evident) dedication in revisiting their earlier, pre-“L’ enfant sauvage” era, when they were sounding more brutal (or “deathlike”). Maturity, longtime bond and undeniable talent enable Gojira to create something authentic and not pretentious. “Fortitude” may resemble “Magma” or bring in mind connotations from early-era staff; irrespective of what happens, elements are unforced and integrated meticulously in the band’s current vision.

The eruptive opener “Born For One Thing” grasps you with its familiar, heavy, Gojirian riff, demonstrating concurrently splendid work on melodies. This carefully woven “marriage” is the band’s trademark, the core of what the album is. But it’s not just that. You will soon notice that “Fortitude” is pluralistic, working on different levels. It’s structured in a way that enables the harmonic coexistence of the band’s different sides.

Indeed, some songs might be examples of what you call “mainstream”, like “Another World” or “The Chant”, while “Sphinx” comes directly from the past, when the attitude was more aggressive and vocals more harsh and less mellow. Their experiments don’t stop: they are able to adjust easily in the tribal, ethnic character of the groovy “Amazonia”. However, Gojira don’t differentiate their orientation, for the sole purpose of differentiation itself. All efforts, irrespective of their origination within Gojira’s mind, occur natural. At the end of the day, that’s exactly what you appreciate most in “Fortitude”.

You may think that they have simplified their patterns, with a few exceptions. You aren’t absolutely wrong. But the band has the ability to transform songs that are structured in a less intricate way and make them more “sophisticatedly complex” than they really are: Gojira’s way of playing remains highly technical and exemplary and their inspiration soars. Let me reconsider what I wrote previously: what’s the reason for considering “The Chant” as “mainstream”, when its harmonic chanting patterns are so addictive that you’ll repeat them randomly during your day, and its grandiose melody and lyrical theme are due to leave a mark in musically and socially sensitive people?

“Fortitude” ends: in “Grind”, the furious barrage of changes in riffing and drumming patterns, where sound is immensely vast and heavy, is succeeded by a sentimental closing section, that reminds us who Gojira are, what they do and what they mean for the metal scene, in a world that tries to recover. The album has a sense of fulfillment: it integrates Gojira’s musical vision/evolution and ecological/social activism; at the same time, it justifies our expectations. You will surely appreciate the band’s impressive skillful performance and fluency in incorporating numerous changes in tempos, patterns and emotions. Only bands like them stride decisively without prejudices. Luckily, Gojira’s music and lyrics concern many people, but should concern even more of us.

PS: During writing these lines, I realize how much I miss their killing live performances.