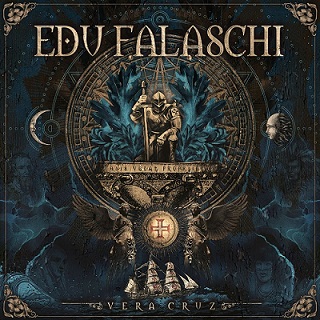 One of the most waited albums of 2021 comes directly from Brazil and is called “Vera Cruz”. Edu Falaschi, former Brazilian singer of Angra and Almah, delivers a masterpiece, a beautiful album. It was released worldwide via MS Metal Records on the 15th June 2021 (physical format), whereas the album was available on other dates, such as in Japan (physical and digital format) on the 12th May 2021, world digital release (Spotify, Deezer, YouTube, YouTube Music and more) on Edu’s birthday (18th May 2021). The great singer/songwriter Fabio Caldeira, from Maestrick, has helped with the concept. We have Aquiles Priester on drums, who plays with W.A.S.P. and has played with Falaschi in Angra. Nevertheless, we have the mega producer, Dennis Ward, with whom Edu has worked, in Angra years. We can hear a collaboration with Max Cavalera (Soulfly, Go Ahead and Die, Cavalera Cospiracy, ex-Sepultura). Let’s not forget the awesome Brazilian producer, Thiago Bianchi, singer of Noturnall, and the Brazilian talented guitarist Roberto Barros, who produced the songs and the guitars. This album talks about the discovery of Brazil by the Portuguese explorers. It’s like a fiction novel. "Vera Cruz" has its starting point in Tomar, Portugal. In 1482, a child, left at the door of a convent, arouses the curiosity of all, due to a peculiarity: a birthmark that centuries before was mentioned in a mysterious prophecy about the extinction of the Order of the evil Nero Cross. It is from this point that the story of "Vera Cruz" unfolds and presents Jorge, the bearer of the brand, who grew up under the care of the Church, full of doubts: what are these messages, that nightmares want to show? About to explore the seas, Jorge is faced with dilemmas about his identity, love, friendship and mission. Made with mixed historical and fictional elements, "Vera Cruz" is a story of human relationships, hate and love. But let’s talk about the tracks. The first one, “Burden”, is a prologue for what’s going to happen. It starts with an ancient choir, that reminds me of the Christian church. Then we hear footsteps, like a woman is running and saying goodbye to her child. The music enters in a different tone. Swords are lifted and a fight begins. The mother of the child is murdered and is taken by a Sister, called Rose, that sees the birthmark and calls him Jorge. The next song, “The Ancestry”, is pure european power metal. You don’t believe me? See how Roberto Barros plays the guitar solo at the introduction and you’ll know why, followed by Aquiles Priestes’s mad skills on drums (no wonder he’s one of the best drummers out there). Diogo Mafra, the other guitarist (who has played with Edu in Almah), is amazingly talented. What makes this song so perfect are the drums and guitars. They make things so easy. Plus Edu’s voice is in a great shape. Very beautiful! Fabio Laguna – does this name sound familiar to you? And what if I told you that he played with Aquiles and Edu, in Angra, back in the 2000s and has joined forces with them in Edu’s solo career? Well, if you said yes, then you’ve hit the jackpot, because you’ll hear him at the start of “Sea Of Uncertainties”, alongside Diogo’s and Roberto’s powerful riffs. The keyboards make the atmosphere full of “uncertainty”. A very beautiful ballad could only be sung by Edu and it’s “Skies In Your Eyes”. “Frol De La Mer” has a special guest: Pablo Greg. He’s responsible for the orchestration in this song as well as in “Burden”, with a choir in it. Raíssa Ramos has the voice of an angel. So majestic. Maestro Adriano Machado was responsible for the string quartet. He has worked with Edu in the “Temple of Shadows in Concert“ DVD. Fast guitars and drums, are the hot dish in “Crosses”. The longest song of the record is “Land Ahoy” and it is Edu’s “Bohemian Rhapsody”. If in “The Ancestry” we have pure european power metal, then in “Land Ahoy” you will hear new sounds, because like the title says, a new land has being discovered by the Portuguese. It starts with the sound of natives and a beautiful solo from the acoustic guitar. Edu’s voice gives the listener a hint that Jorge, when he arrives in Brazil, is so astonished by the beauty of the land. Marcus Cesar, the percussionist who has played with so many people, such as Phill Collins, gives that Bazilian atmosphere, with the choir. Tiago Mineiro is the pianist you will hear in this song. I like the acoustic guitar solo in this song, followed by Roberto’s solo. Edu’s voice sounds so lovely! For me, this is the best song! “Mirror Of Delusion” has a fast drum - Aquiles is incredibly fast. The man is insane, like Roberto and Diogo. Love the bass line, played by Raphael Dafras (who has also played with Edu and Diogo in Almah). I’ve cried, while writing about this next song. DAMN, EDU -  “Bonfire Of The Vanities” is very special. It is not other than Edus’s bother, Tito Falaschi, who has played the guitar solo. With “Face Of The Storm”, Edu shares vocals with Max Cavalera. And what better way to end the record than with a love song? “Rainha Do Luar” is sung by Edu and Brazilian guest, Elba Ramalho, sung in English by Edu and in Portuguese by Elba. Beautiful piano elevates Elba’s voice, with an accordion, played by Rafael Meninão. This year marks Edu Falaschi’s 30th anniversary in the music business and with this album, the Phoenix has reborn. We can’t wait to see him on the road. European labels. what are you waiting to give this guy a deal?!