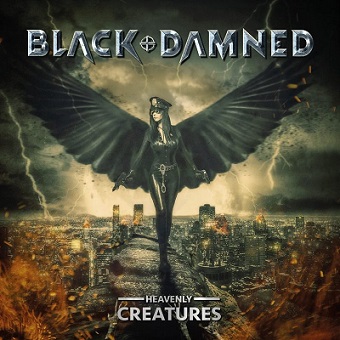 In the beginning of a new decade, a new disease has paralyzed us (concerts, festivals and so on). But a new band has immerged from the depths of obscurity. That band is Black & Damned. They’ve just released their debut, called “Heavenly Creatures”, via ROAR! Rock Of Angels Records. The album was mixed and mastered by Achim Köhler at Indiscreet Audio (Germany) and the artwork was edited by Michael Vetter (Menschbilder). The album starts with a bang - a quick drum roll, provided by Axel Winkler (Masterplan), followed by kick-ass guitar tones. There are different tempos, played by Michael Vetter and Aki Reissmann on guitars. “Salvation” is a way to start the record. And a very good start. It shows how skilled these musicians are. “Liquid Suicide” is traditional heavy metal. Metal from the 80’s and the combination of the guitars with Roland “Bobbes” Seidel vocals is a winner in this one. “Born Again” is so incredible to hear, due to the drums, the bass (played by Ali Gözübüyük), the guitar solos throughout, the voice that captures many emotions, sung in many layers and the chorus. The whole package shows again how amazing these musicians are. “The Wardress” starts with an Asian guitar sound, followed by a guitar solo and a drum beat. Then the riffs start to improve the blast beat. A keyboard is added to give that power metal core and sound, played by Axel Mackenrott, who is a special guest and plays keys and samples in Masterplan , ending how it started (with an Asian guitar). Here then we have a power ballad - “War Is Just Another Word For Hell”. A slow intro, that leads you to an awesome and gentle guitar riff with a keyboard. All combined. The chorus never disappoints. This song is about the aftermath of war, there’s nothing left but the scars and hell.  It gives chills down the spine! “A Whisper In The Dark” is awesome. The guitars and voice are insane, fantastic. Who said 13 is the number of bad luck? You must listen to “The 13th Sign”, because it’s a sign to good music and Roland sure sounds like a wizard, with that laugh and singing. One of the fastest songs is “The World Bleed”. The song is a furious rollercoaster. I love how Axel kicks the drums and rides the cymbals and pounds all together, furiously with the bass. “We Are Warriors” starts like a march and reminds me of military or navy. Finally, we have “Heavenly Creatures”. It is a bit like “Mr. Crowley" by Ozzy Osbourne. It has an old vibe to it, which is very nice, especially the use of keyboards. If you buy the CD, you’ll find two exclusive tracks. “Decide On Your Destiny” is one of them - let this one decide your future. The other exclusive CD track is “Dreams To Stay Alive” – it is better for you to dream, if you want to stay alive. Black & Damned are very talented musicians. If you hear this album, you won’t notice that this a debut, because they created a masterpiece, musically and lyrically speaking. They’ve combined good power metal with classic heavy metal. Well recorded, produced and mixed!