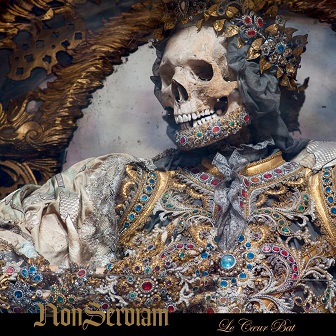 Non Serviam define themselves as an anonymous anarchists’ collective from Paris, who compose and play extreme metal. They formed around twenty years ago as a one-man experimental electro/noise project. Now, after an exclusively electronic/industrial debut in 2014 (“Un petit peu d'amour pour la haine”) and the additions of some new members, they considered our times and conditions appropriate for the release of their second effort. They describe “Le Coeur Bat” as a mixture of different elements: industrial, experimental, black metal, grindcore, trip-hop, baroque, electro, doom, crust are blended in a bowl of exploding rage, nightmarish paranoia and multifaceted sonic and non-sonic attack.

Before listening to the album, you should forget all that you knew so far. Familiar structures and rules do not apply here. “Le Coeur Bat”, musically and ideologically, is about abolishment of the established order. Your perception towards the album might be blurred due to conventionalism. If this happens, it’s natural, but it’s a trap. Subversion might not be always easily accepted; stereotypes are an impediment. Of course, I’m not omniscient. Even me, who have the responsibility of writing these words, cannot conceive completely Non Serviam’s transcendental creation. The observation (let alone the acceptance) of non-conformistic views might be a rambling way, full of burdens. Concerning music, persistence can lead us to paths where, some time ago, we could not even fathom we could stride.

The core of Non Serviam’s work is the electro music via a baroque approach; this affects the whole perception and the way songs are structured and composed. You are amidst disharmonic, unconventional, distorted guitar patterns, countless interchanges of black metal/sludge/grind themes with the prevalent electronic/ambient element, multiple layers of screams and vocal samples that hover above unexplored paths, desperately eager to find untold truths and bring them to light. You are surrounded by a rowdy totality, an unprecedented, prolific orgy of curious minds; minds who are rather travelers than pure musicians, coming across different cultures during their journeys and collecting pieces that form the virgin soundtrack of the revolution.

“Le Coeur Bat” operates as a maze, but it has a purpose: creation through degradation. It’s a versatile, distorted gem, with seeds in the electro universe (this is as evident as its darkness) and branches exceeding to, and scouting, a wide musical mosaic. These branches are the uninhibited curiosity of the band’s members, feeding the mechanism with rich ideas, which are degraded and then reformulated daringly, in alignment with the album’s conceptual and musical context. This is how polymorphism is ensured, challenging you to pinpoint what you’re hearing, after the unavoidable initial shock.

Abstract, electronic sounds form a dark, noisy landscape, a whirlpool of insanity, where unshaped voices of every kind prowl endlessly around, yelling wildly or whispering fiendishly stories of oppression and uprising. Growls, screams, samples, fathomless whispers, are not just vocal patterns: they are used as an additional musical instrument, intensifying the dystopia. And among the electro-noise pandemonium, you encounter familiar, cold Scandinavian riffage, sludge confections, spacey, ambient escapes and foggy trip-hop paths, in hard-to-follow and difficult-to-predict sequences. Indeed, within this majestically conceived maze-verse, you cannot know what comes next.

Non Serviam choose persistently the difficult way. How many bands welcome you with a 25-minute composition? The homonymous daring opener summarizes Non Serviam’s self. The gradual escalation till the long-awaited explosion, the Darkthrone-originated pattern that struggles to emerge amidst the frantic, noisy electro-verse, the de-escalation of the fury, constitute a frenetic, nightmarish, provoking labyrinth. “Le Coeur Bat” is a twistedly diverse chameleon, enabling the co-existence of miscellaneous influences: ambient, dreamy, trip-hop paths and shoegaze essence in “Infanticide”, torturous, tyrannical, sluggish sludge patterns in “Salem” that test your limits, exclusively electro elements in “S’Evaporer”, where slow electronic beats form a claustrophobic environment, like a scenery from a postmodern film noir.

Surprisingly, “I Watch You From Afar” is more straightforward (at least for Non Serviam’s standards), combining pure black metal aesthetics with insane, sardonic voices. The exploding cold, Norwegian riff and the dramatically fast drumming highlight the band’s dystopian, electro-black metal. The equally sick Erebus shed by the up-tempo “Inno Individualista” makes a perfect contrast with “Je Contre”, where a dirty, foggy guitar theme “plays” with an otherworldly electronic calmness: a calmness that greets you in a Parisienne pavement.

“Le Coeur Bat” is difficult. The elaborate blending of numerous elements and peculiar way of exploring and composing result in a previously unheard sonic and musical hybrid. Non Serviam are a sponge that assimilates experiences from totally different backgrounds, distill them and produce something completely new and distinguishable. I already mentioned that only through a new awareness, a consciously formed blank page, can you conceive the multi-dimensional “un-structure” of “Le Coeur Bat”. I repeat that even me cannot grasp yet, at least at a satisfying extent, its ungodly aspects. Indeed, my relationship with it becomes uniquely interesting, being built gradually, brick by brick. If I write this review a few months later, I may make totally different comments. But I cannot delay further unless I want to be hunted by the website’s administrator and his riffle.

Nevertheless, despite my unreadiness, I have already urged people to listen to the album. You may hate it or adore it. Be patient. Patience is a virtue (but not always). But you should not approach it regardless of its ideological/historical background. Learn the stories behind the lines.

PS: The transcendence of conventional order is ungradable