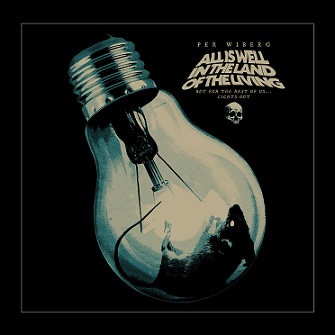 Following the LP “Head Without Eyes” released in 2019, the music mastermind of Per Wiberg has worked on his next plan, which comes out as a 4 track EP, a release supposed to be viewed, presented and come out as a whole piece, but the artist decided to make 4 tracks, and name each track taking parts of the title. How cool is that! The EP has references and could be considered as the sensible continuity of the LP; however, it has differentiated itself, in terms of influences, overall sound, and structure. It is very dark and heavy in its mood and atmosphere and especially the 3 track (which is almost instrumental) gives a dramatic tone to the whole, with the minimalistic piano riffs to make it more intense, more vivid. There are influences from Hawkwind, the few solos and leads have a Pink Floyd substance and also the guitar sound adds an ‘industrial’ flair to the songs, making the EP very diverse and varied. More specifically, the third song ‘But for the rest of Us’ could easily be the soundtrack of a dark gothic movie, providing the ideal background for such a situation. “All is Well in the Land of the Living but for the Rest of Us ... Lights Out” is and should not be a surprise for no one. Per Wiberg is such a multi-dimensional and multi-inspired musician throughout the years who wants to challenge his own self towards new creative territorial lands. He pushes himself forward from the vocalist perspective as well, something that he has proved in his career so many times in the past (Mojobone, Kamchatka, King Hobo, and others), and his solo works is the perfect ground to do that, where he has more freedom and space.