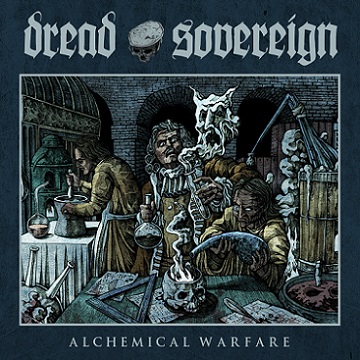 Obviously, Alan Averill never rests. His uneasy spirit always searches for expression (or redemption). His fears and burdens could not be contained within Primordial’s context of cultural heritage. Hence, Dread Sovereign were formed as a side-project, intended to be the vehicle that would enable him to follow paths of his own; paths that diverge from Primordial’s orientations musically and lyrically. In this respect, Dread Sovereign succeeded. Regardless of the rather unequal debut in 2014, where the attributes of the explicit doom foundation (see Saint Vitus) were actually “betrayed” by the unnecessary long duration, the purpose was fulfilled. Alan’s anti-Christian perception, along with his rock influences, were now unbound.

Three years later, “For Doom the Bell Tolls” showed that Averill started to mature as a composer, writing a more balanced but different album. Though maintaining his doom origins, up-tempo heavy metal patterns occurred selectively, while rock experimentations became more daring and substantial; some of you may remember the Hawkwindian “The Spines of Saturn”. All the above, made me wonder as to where this year’s “Alchemical Warfare” would place itself.

Well, it’s obvious that Dread Sovereign entrench the above-mentioned shift; now we cannot talk for some inklings of a new direction, but a whole turn in their sound. The strong branches of the traditional doom forms of “All Hell’s Martyrs” become rather feeble twigs in the present days of the band. Averill focuses clearly on classic metal/rock, even strolling along epic metal territories. This direct linkage with the early 80s -or even 70s- era made “Alchemical Warfare” sound dirty enough, given that Metal Blade maintained the peculiar, raw NWOBHM aura.

The first moments of “She Wolves of the Savage Season” may bring in mind Dread Sovereign’s doom-esque properties. However, the track changes later on, revealing the band’s true self: patterns become fast-paced, heavy and British, flirting with epic towards the end. Numerous, vibrant themes and timely transitions constitute an adventurous opener and a rather different composing approach. Matters become more straightforward in “The Great Beast We Serve” and “Nature Is the Devil’s Church” (the album’s singles): both of these tracks feature classic heavy metal galloping rhythms that tend to be epic (some Cirith Ungol fans may feel familiar). That’s the essence of the rawer “Devil’s Bane” as well, where early Venom arise.

On the other hand, the awesome “Her Master’s Voice” emerges from traditional doom/heavy metal fields, to make references in classic 70s rock material. Alan’s chilling vocal patterns and classic leads escape our current time-space dimensions, travelling us to times when things in music were pure and unbiased. But in “Ruin upon the Temple Mount”, the band revisit themselves, commenting that no matter the extent of their diversion, their core can be as doom as they want. The closing with their cover on Great Bathory’s violent, angry, punkish “You Don't Move Me (I Don't Give a Fuck)”, besides from being a declaration of admiration to many artists’ roots, indicates bluntly that different Dread Sovereign’s faces can co-exist harmonically within an album.

Indeed, “Alchemical Warfare” offers various worth exploring attributes: either doom, heavy metal-oriented or raw and punk, its ideas are multi-faceted and intriguing. Τhe band has found balance amidst different influences, writing songs that don’t lack quality, supported by splendid, old school analog production; and Averill’s chilling, expressive vocal performance keeps you enchained, waiting for his next line. Those of you who prefer his vocal than composing abilities, won’t be disappointed.

Irrespective of their “specification” as a doom metal act, Dread Sovereign in their third attempt become inappropriate for traditional doomsters. On the contrary, those who prefer varied musical expressions or unprocessed, dirty NWOBHM, might find interesting stuff. Dread Sovereign’s proposal is explicitly for the latter. Why? Because they like it!