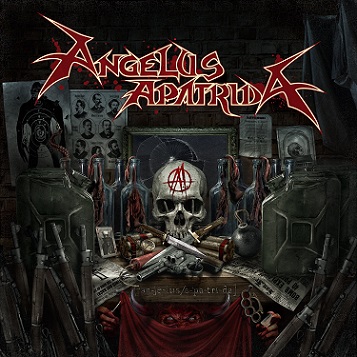 Angelus Apatrida hails from Albacete, Spain. The quartet was formed in 2000 and this is the band’s seventh album. Whoever knows the band can easily imagine what he/she will hear on this record. “Angelus Apatrida” is a thrash metal blast, a fantastic extreme metal attack, in the style the band plays in its recent releases. It’s crystal clear that all the big American thrash metal bands (mainly Slayer, Exodus, Metallica and Megadeth) have influenced Angelus Apatrida, who has prepared a thrash metal cataclysm for you – killer riffs, in-your-face vocals, fast tempo on the rhythm section, which sounds like a bulldozer, technical solos, politically sensitive lyrics and a solid production which pays attention to all the instruments (for example, listen to the distinctive sound of the bass guitar). “Angelus Apatrida” proudly displays the band’s musicianship and song writing skills, which all lead to consummate thrash metal songs. This new album has all the ingredients of a good thrash metal disc; the band doesn’t compromise, turns on the riff-machine and destroys everything on its way. Songs like “Indoctrinate”, “Rise or Fall”, “We Stand Alone”, “Empire of Shame” etc. will make you wanna headbang, all the album in its entirety will monopolize your interest. Give it a listen and I am sure that you will find many intriguing things here! Nothing new, just the good old recipe with a nice result, for all your thrash metal needs. Let the angels start the moshing!