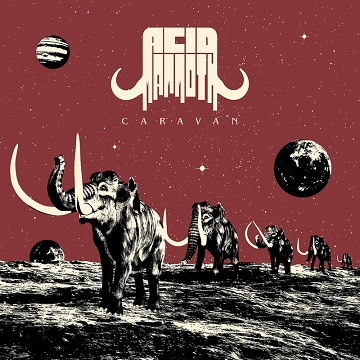 Beware! Athenian, prehistoric, elephantid beasts parade sublimely. Acid Mammoth’s “Caravan”, the successor of last year’s “Under Acid Hoof”, offers again pure, foreboding doom. I refer to the kind that was delivered by the doom-makers of Birmingham to their unholy, bastard children like Electric Wizard, Monolord and Windhand. The children who took their father’s doom in their impatient hands and shaped it according to their wicked minds. Acid Mammoth, comprising four Black Sabbath freaks, including a father and his son (how unique it is to form a band with your father!), after their first independent release drew the attention of Heavy Psych Sounds. That was a significant step for the band, indicating that they do something right. Just consider the artists from the wider downtuned / psychedelic universe who collaborate with the well-known Italian label! “Caravan”, like its predecessors, is full of fuzzy, hypnotic, Iommian riffs. Slow patterns, full of sonic distortion, give the impression that take a material form, weighing tons. Electric Wizard’s horrific atmosphere is omnipresent, but now the approach differs. Despite the rather rigid music they play, Acid Mammoth make progress, introducing new intriguing ideas. Seek them in the form of melodic patterns on top of the overall heaviness: this is the element that caught my attention initially. Melodies and solos are so well-timed and properly crafted in all five tracks that you cannot ignore them. On the contrary, each time you wait for them eagerly. And Chris (the Junior!) has this warm, mellow voice that comforts you, while speaking of demons and witches. This alternate version of Ozzy and Jus Oborn is sardonic, yet familiar, a perfect match for all the fuzz and darkness that reach our ears.  “Berserker” and “Caravan” feature that mesmerizing melodiousness I talk about (adore the appealing solos!). But the latter excels in its pro-cataclysmic heavy essence as well. That must be the peak of the album: indeed, you might actually see the mammoths parading in a frozen tundra with all their pride. The ominous soundscape wouldn’t emerge properly, had it not been for the solid rhythm section. Dimosthenis’ crushing basslines are an immense, sick stone wall; an unmovable foundation, a gigantic presence, that even comes in the foreground when allowed. But above everything, Marios’ plain, thunderous, prehistoric drumbeats send electrifying signals through your spine. Adhere to his ceremonial patterns in the first moments of “Psychedelic Wasteland”, the homonymous track and “Black Dust”. Indeed, rhythm section is almost ritualistic and primitive, bringing in mind Conan’s point of view. Acid Mammoth manipulate skillfully their roots and create something really inspiring. They worked a lot during the quarantines and succeeded in making “Caravan” as wicked and unbearably heavy as it should be. The immersive, warm, vintage sound serves exemplarily their purpose for horror and witchcraft storytelling. “Caravan” is so well-crafted, that we are forbidden to ignore it, despite its straightforward influences. Let this dark, bewitching creation capture you in its claws: you will not need repeated hearings to succumb to its twisted grace. And at the very end of a dark corridor, dimly lit with candles, you might see Uncle Acid smiling maliciously. “Caravan” was made from doοmsters, addressing to doomsters only!