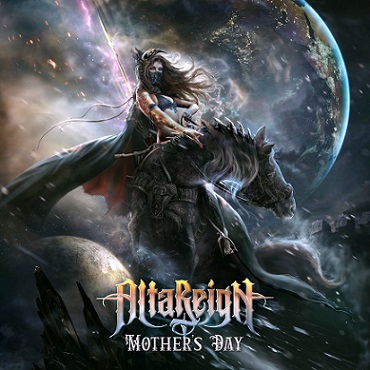 Alta Reign was created by the one and only Jeff Plate, drummer of bands like Savatage, Trans - Siberian Orchestra, Metal Church etc. In Alta Reign, Plate has the first role in the composition of the songs and the lyrics; to achieve this he used ideas that come from his collaboration with Matt Leff and Zak Stevens almost thirty years ago. He is also influenced by the bands he participated in. Plate suggested Zak Stevens to become the singer of Alta Reign, but Stevens politely refused due to his involvement with Archon Angel. As a result, guitarist Tommy Cook, who participated and helped Plate in the demo, remained in the band and is sharing vocals with singer Collin Holloway, with whom Tommy collaborated in Sunsonic. Also, Jane Mangini (keyboards), Jeff Plate’s partner in Trans - Siberian Orchestra, contributed a lot to the final result of “Mother’s Day”. We must mention too, that Chris Caffery and Joel Hoekstra participate in the album (in the song “Rise” and the song “Mother's Day” respectively). This debut album of Alta Reign is a musical journey into the past and specifically, a tribute to the late ‘80s. Its music can be characterized as progressive metal with melodic rock elements, catchy riffs, loud and solid playing on the drums and emotional keyboards. Do not miss the opportunity to listen to Alta Reign; this is a great record. Another thing that caught my attention was the combined singing of Cook and Holloway throughout the album. After listening carefully to “Mother’s Day”, we understand that this brain child of Jeff Plate is the final outcome of his numerous experiences with the aforementioned big acts. “Mother’s Day” is the realization of his vision, and it sounds great!