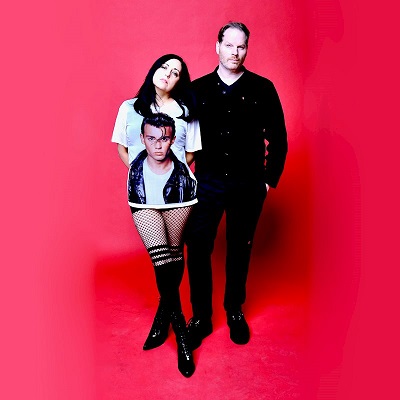 NYC-based alternative rock / post-punk duo A Cloud of Ravens present their new single 'Nature of Artifice'. Following lead track 'The Blackest Mantra', this is the second taste of their third full-length album 'Lost Hymns', to  be released in early 2023 via Berlin-based Nexilis Records, a division of Schubert Music Europe.

Formed in 2018 in Brooklyn by Matthew McIntosh (guitar and vocals) and Beth Narducci (bass guitar), the duo began work on this new album in the spring of 2021. Completed by autumn, this LP was mastered by ACTORS' Jason Corbett at Jacknife Sound studio in Vancouver.

"The song 'Nature of Artifice' is about choosing to bury your head in the sand, rather than confronting glaring societal ills and moral injustices. It’s easier to get lost in the minutia of our click and swipe modern world than watch its blessings crumble around us. To some extent, none of us are blameless," says Matthew McIntosh.

At the outset, A Cloud of Ravens hit the ground running with a string of self-released offerings, making their mark in the burgeoning contemporary dark music scene and garnering attention that would result in a one-off release date for their 2021 album 'Another Kind of Midnight', a mournful yet triumphant collection exploring the heart of a world amidst a devastating pandemic and torn by moral tribalism.

Effectively merging classic and contemporary post-punk and darkwave sensibilities, their somewhat poetic use of prose and metaphor expressed the trials and joys of the world in which we now find ourselves. A Cloud of Ravens' subsequent remix-based EP featured reimagined tracks by legendary producer John Fryer and such prominent artists as Clan of Xymox, ACTORS, Chris Vrenna and Ritual Howls.

On November 11, 'Nature of Artifice' will be available across digital outlets, including Apple Music, Spotify, Amazon and Bandcamp. The full 'Lost Hymns' album will be released on February 24, 2023.

The band will be playing their final show of the year on December 17 at Prohibition River Live in Nyack, NY. Towards mid-2023, fans can already look forward to North American tour dates with Clan of Xymox and Curse Mackey.

Steve Vai and Favored Nations / Mascot Label Group have announced the release of VAI/GASH digitally and on CD January 27, 2023. The vinyl album release will follow on February 24. Today, they present the official video for “In The Wind” which can be viewed below. Vai offers, “’In The Wind’ was the first track that was recorded for this record. It captures the spirit of the open road freedom we felt while riding our Harley’s on bike rallies and interstate road trips. The track has the exhilaration of having that kind of power under you while kissing the wind”.

As Vai shares, “This record was written and recorded in somewhat of a stream of consciousness in 1991 within perhaps a 2-week period as an answer to my desire to have a particular kind of music to listen to when I was riding my Harley Davison Motorcycle with my friends. It’s reminiscent of a certain type of rock music I enjoyed as a teenager in the 1970’s. These recordings sat on the shelf for over 30 years and are being released now in 2023. Here’s the story…”

An abbreviated synopsis of the anecdotal history and fond remembrances as articulated by Vai in the liner notes offer detail on singer Gash and his deep connection to Vai. From his teenage years on Long Island, to today, he has openly shared his love of motorcycles. Gash shared that passion.

Vai reflects, “Around 1990, I was overcome with a desire to rip out what I thought would be a straight-ahead type of rock record that contained the kind of music I wish I had to listen to when I was that teenager ensconced in the biker culture. And then I met Johnny “Gash” Sombrotto.”

John was born in Queens, New York and as a youth was an avid motorcycle enthusiast. In 1977 at the age of 21, he endured a serious accident that caused his body to catch fire while plunging 30 feet onto a barbed wire fence. Vai wrote in the liner notes, “The doctors told his family that he had third degree burns over 60% of his body, and that if he even survived, there was a strong possibility that he would lose his right arm and left leg. While in the Burn Unit, he endured excruciating pain, especially when given the intense daily cycle of hot baths for his burns. He soldiered on, and after a month he was finally discharged from the hospital. Luckily, no limbs were amputated. He was, however, left with a partial left ear and layers of skin grafts over his neck, arms, legs, and entire chest.
The stories he told about his recovery and the excruciating pain involved were crushingly gut wrenching. But he survived, and eventually thrived again. He made his way out to Los Angeles in 1982 and got right back up on his motorcycle.”

Vai met John through a mutual friend, Mark Cimino. They bonded over biker culture, and he choose the name “Gash” as a nickname. Vai wrote, “…I’ve observed many people interacting with him on our numerous motorcycle road trips and other adventures. At first sight, many people could be taken by his bald head, scarred neck and burnt-off ear. Looking as he did and riding a Harley it was easy to assume he was perhaps a tough, menacing biker with a nefarious attitude, but after engaging with him for even a minute, his charm and magnetic charisma had them laughing in their shoes and completely enjoying his uplifting presence. He endeared people with his wit, warmth, and sparkle. John hit it off instantly with the most unlikely of people of every age, color, size, political or sexual persuasions. He was non superficial and never judged people. This allowed his engaging personality and intoxicating charm to draw you in. Under all those scars was a bold and fearlessly warm heart that can be seen in his disarming and big soft blue eyes.”

He continues, “…something in me wanted to get him in the studio and see how he would belt over these biker type songs I had demoed, but nothing could have prepared me for the voice that came out of his mouth. I had to think, off course he sounds like that because that’s him, confident, authentic, fearless but with a light-hearted intention. This was the voice I wanted to hear wailing over these slamming rock tracks. I was stunned. Around that timeframe I was also starting to launch work on ‘Sex and Religion’ and was hoping to eventually record more than the 8 songs I had laid down with John for an alternative project, but that was proven impossible. On September 7th, 1998, two days after my father had passed away, the phone rang, and it was John’s beloved girlfriend Nancy. Her voice was quaking, and I somehow knew what she was going to tell me. ‘John was in a bike accident and was killed’.”

After three decades, Steve Vai has finally shared this master with The World. In his opinion, “He would have absolutely been the greatest rock lead singer you would ever want to know. All the elements were in place, but he was gone. Disheartened, I put the entire project on the shelf, and would listen to it at least once a year for the past 30 years, especially around the anniversary of his passing. Then recently something compelled me to want to put it out now. I wish you would have had a chance to get to know John. I believe you would have loved him just as we all did. For now, he is ‘In the Wind’.” 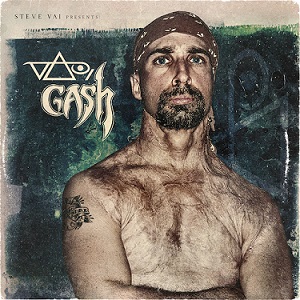 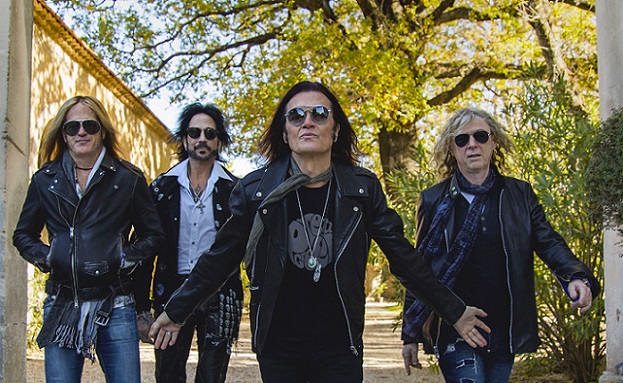 The Dead Daisies have just released a video for the song "Born To Fly".

From day one, David was Born To Fly!!With The Dead Daisies about to wing their way to the UK on their Winter Tour in December, the single ‘Born To Fly’ is set to take off today… The inspiration for the song was guitarist David Lowy’s love of flying. From playing with a little balsa wood glider at the age of five to flying in a BAE Hawk, he was motivated to get his pilot’s licence and to one day own a jet fighter. He spent his holidays learning to fly and after seeing the Sydney Aerobatic Club, he set his sights on becoming an Australian Aerobatic Champion and achieved that goal in 1998. David would later acquire and learn to fly Spitfires and Vietnam War-era A37B Dragonfly light attack jets, which would lead to a host of other Warbird aircraft acquisitions. In 1999 he established the Temora Aviation Museum in New South Wales, Australia.  David’s passion for flying has stayed with him ever since.

“Doug & I got together in New York earlier in the year and worked on a riff that I had written previously.  Doug had a chorus that just fitted, we messed around with the melody and came up with the name ‘Born To Fly’.  This is a straight-up rock song.  For me it's literal, I was born to fly.  However, we're all born to fly in our own way.” – David Lowy

“Born To Fly deftly balances soaring and catchy melodies with riffs that could grind bones to dust.” - 100% Rock

After last year’s incredible UK Tour, The Dead Daisies are itching to return and celebrate their new album ‘Radiance’ with their UK fans who count among the most die-hard in the world.  The tour kicks off at the iconic Rock City in Nottingham and runs the gamut of the top UK, Scottish and Irish venues including London’s prestigious O2 Forum Kentish Town.   Joining them are very special guests, revered UK legends FM and the Graham Bonnet Band.

Get your tickets from: 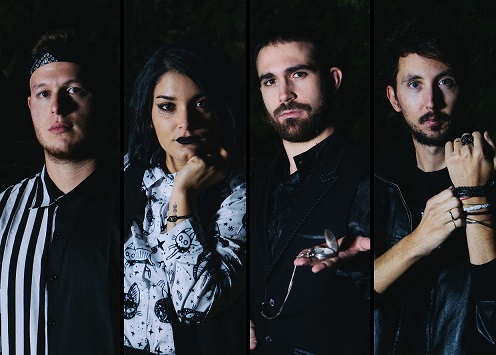 The Sunrise presents the official video for "Paradigma", a track taken from The Sunrise's new album "Rising In Loop", out via Wormholedeath worldwide.

The Sunrise is a progressive/hard-rock band based in Venice (Italy). Their music style is a mix of different musical genres such as Pop - Rock Progressive and Metal.