Ex-Venom and Venom Inc. drummer, legendary Abaddon (aka Anthony Bray) has just revealed that he has been diagnosed with lymphoma and has started chemotherapy.

Some days ago he wrote on his Facebook page: "I noticed a mass growing on the side of my neck in July 2022, I thought it was maybe an insect bite as I live near the sea and it was a hot month here. The mass grew bigger and, urged by my wife Rachel, I went to see my GP who reassured me that it was most likely not cancer because cancerous lumps don't come up over night usually, rather they take a longer time to grow. However she referred me to the freeman hospital in Newcastle to a specialist who reiterated her thoughts on the speed of my growth. He did some tests then sent me straight away for a biopsy, I had three samples taken and then went back to see my specialist who said that sadly it was lymphoma a cancer of the blood. He sent me immediately for a CT scan and an MRI scan which showed that I also had cancer in my bowel and lower intestinal tract. He decided therefore to not operate on my neck but to refer me to haematology at wandsbeck hospital in Ashington. They decided on 6 cycles of chemotherapy which I started yesterday. I will also be referred back to freeman hospital for radiotherapy after a few bouts of chemotherapy. None of this will break me. Fuck cancer".

One day later Abaddon made a short update, saying that he was felling "pretty good" after the first chemo session, but added that his condition could have been aided by the fact that he was on "17 steroids".

We would like to wish that Abaddon gets well soon! 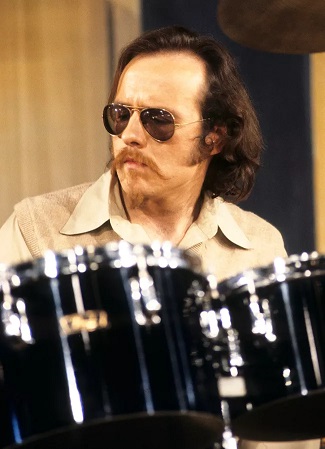 Sad news for the world of music. Doobie Brothers co-founder, drummer John Hartman has died, at the age of 72. The legendary rock band announced Hartman's death in posts on its official Instagram and Twitter accounts, where they complimented him as "a wild spirit, great drummer, and showman".

The statement reads: "Today we are thinking of John Hartman, or Little John to us. John was a wild spirit, great drummer, and showman during his time in the Doobies," the band wrote in its social media posts. "He was also a close friend for many years and an intricate part of the band's personality! We send our condolences to all his loved ones at this difficult time. Rest In Peace John".

It is not known yet, when did Hartman die and the cause of death.

Hartman served as the Doobie Brothers' drummer on each of the band's first eight albums, and performed on popular tracks including 1972's "Listen To The Music" 1973's "Long Train Runnin'" and 1978's "What a Fool Believes".

Mike Howe's death won't make the other members of Metal Church give up. To the contrary, the American band has already found a new singer and its new album will come out in 2023. That's what Kurdt Vanderhoof stated, in a Metal Rules interview. Let's see what the guitarist said.

Asked how he processed Howe's passing, Vanderhoof said: "To be honest, I really haven’t processed it. I can't. I can't imagine what it must feel like to feel that suicide is your only option. And because he was like my brother and to find out he was in such pain and it's too late to try and help is just something I cannot get my head around."

Asked about a new Metal Church album, he answered: "I had written a new record and Mike and I had just begun the process before he passed, ... So I had a lot of material on hand. I also wanted to complete the album in honor of him. I have written a batch of additional material and it's going in a more aggressive direction."

According to Kurdt, he and his Metal Church bandmates are "keeping a lid" on the identity of their new singer "for the time being." However, he revealed: "We didn't choose a Mike Howe clone or David Wayne clone. We decided to approach the future as a 'new' chapter in the band's career. I think the fans will really dig it."

You can now see how Norway's Gothminister awake our "Demons" in a brand new music video! Gothminister's new album, "Pandemonium", will be out on October 21st via AFM Records.

With his captivating debut ‘Gothic Electronic Anthems’ in 2003, Gothminister Bjørn Alexander Brem took the dark music scene by storm, unleashing a thunder of pitch-black magic. Powerful metal riffs march relentlessly arm in arm with huge orchestras and heavenly choirs, while the master himself reveals an astonishing range of vocal art: from the deepest gothic-dungeons up to the higher spheres of steaming rock. It’s the overwhelming combination of catchiness and darkness; a thrilling craft of composing within the marrow of gothic, industrial-metal and electronica, that became Gothminister’s trademarks ever since.

On October 21, 2022 Gothminister will release their new album, entitled "Pandemonium", via AFM Records. Following previously-released singles, "This Is Your Darkness" and the haunting album title track, today the goth and industrial metal ministers have premiered a brand new video to awake your "Demons"!

"This brand new single «Demons» has a mixture of some well-known Gothminister-elements like heavy guitars, a driving rhythm, growling melodic vocals and even an strange opera-lady singing," band mastermind Bjørn Alexander Brem comments. "When I wrote this song, I pictured a weird, dark club, a dancefloor taking off, lots of freaks on it, and the main character in this setting drinking in the bar while being chased by his inner demons - evil creatures litterally coming out of his head."

The trilogy comes to a temporary end with Gothminister ’s third music video "Demons", as Brem explains: "In «Pandemonium» we saw the fall of the evil king and his city, and that a new king was born. «This is your darkness» seen Gothminister scouting from his watchtower while the army of dead was searching for new souls to conquer.  In «Demons», we go back in time, and discover that also the evil king in «Pandemonium» had a past himself as a normal man where he is challenging the cruel magic of his precessor.

However, you should be careful fighting someone else’s demons - it may awaken your own…".

With tracks like “Devil” (Gothic Electronic Anthems 2003), “Monsters” (Empire of Dark Salvation 2005), “Darkside” (Happiness In Darkness 2008), “Liar” (Anima Inferna 2011), “Utopia” (Utopia 2013), the last single from the CD/DVD horror movie concept album which even reached the national finals of the Norwegian Eurovision contest, “Ich will alles” and “We are the ones who rule the world” which both entered the Top 10 of the German Alternative charts and brought thousands of fans together on a tour across Germany together with ASP, Gothminister has gotten a significant following all over the world through the years. New album, "Pandemonium", will make no exception. 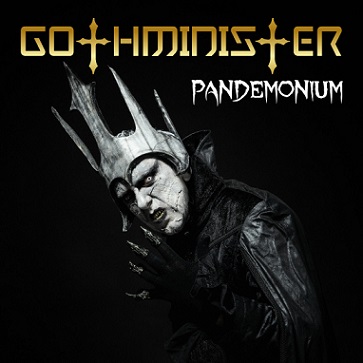