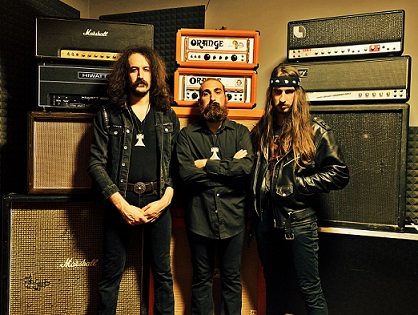 Italian heavy riffers Cancervo’s 2nd album, II, will be out digitally and on multiple variations of vinyl on 27 January 2023 via Electric Valley Records. As the final (and second) preview of the album, Cancervo shares the third track, “The Cult of Armentarga,” a portrayal of a mystical church located on the Monte Cancervo — the mountain that stands as the inspiration behind the band’s moniker as well as the music.

Cancervo comments:
“A small church in the middle of the mountains, this might seem ARMENTARGA…those doors, however, represent the access to eternal light against the dark.
“Get ready for a riff that will ring in your mind for eternity!”.

Cancervo will kick off a European tour on 16 March and run it through 25 March 2023.

In 2020, three guys from San Giovanni Bianco, Bergamo, started their heavy rock group, charmed by the folktales, legends, and rich traditions associated with Cancervo, an iconic local mountain in the heart of a valley. The trio eventually named their band Cancervo as a tribute to the mountain.

II, the upcoming album continues Cancervo’s occult tales of their lands. In search of doom roots, the album takes more and more motivating forces from the early ’70s and passably abandons the psych moments of the first album. Unlike the first full-length, I, which was entirely instrumental, the upcoming album incorporates vocals on most tracks.