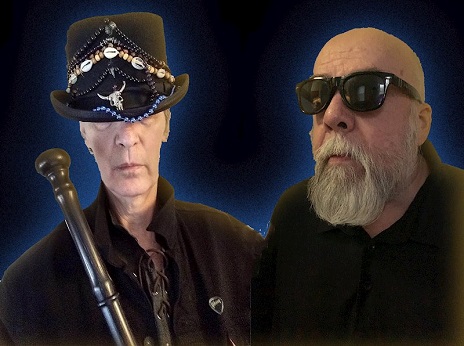 Art rock collective The Pull of Autumn have teamed up with Luke 'Skyscraper' James of I.R.S. recording artist FASHION on 'Funhouse', the latest offering from the collective's fourth album 'Beautiful Broken World', an ambitious 15-track undertaking that began in early 2020. James is a key player in The Pull of Autumn, having contributed to every album released to date.

This record involves a number of iconic artists, including Philip Parfitt of The Perfect Disaster, Stuart Moxham of Rough Trade postpunk band Young Marble Giants and John Neff, who has contributed to multiple David Lynch films and is also a member of David Lynch’s Blubob.

The Pull of Autumn is a ‘super group’ of sorts, with songs orbiting around Rhode Island artist Daniel Darrow of Johanna’s House of Glamour and involving numerous emerging and notable musicians from the local music scene and further abroad. The band's debut 2018 eponymous album was followed by 'Afterglow' in 2019 and 'Small Colors' in 2020.

"This song is about how people in rural communities used to have to wait a year for the circus/ carnival to come to town. Then it would be gone. As opposed to the oceans of distraction and "entertainment" that the human race currently wallows around in," says Luke 'Skyscraper' James.
Daniel Darrow adds, "For 'Funhouse', I wanted to add an inner-ear sound that would give the track an otherworldly sound. Luke is a fabulous writer and easily grasps many different sounds in sound design. We’ve been friends since 2018 and I’m glad we have a wonderful friendship as well as shared interest in all types of music."

'Beautiful Broken World' is out now, available across online stores and streaming platforms like Apple Music and Spotify, as well as Bandcamp, where it can be obtained directly from the artist.