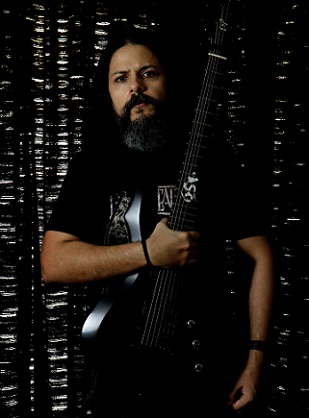 Black Lion Records welcomes Demonstealer, India's premier metal musician Sahil Makhija’s (of Demonic Resurrection) solo venture, to its diverse roster. The Swedish label will release the upcoming fourth full-length of the progressive extreme metal artist, in addition to re-releasing four titles from his acclaimed back catalog, including two albums — This Burden Is Mine (2016) and The Last Reptilian Warrior (2018) —and two Eps — And This Too Shall Pass (2020) and The Holocene Termination (2021).

Demonstealer comments: “I've been an independent artist for most of my two decade-long career and my entire catalogue as a solo artist has been self-released. For a long time I've been looking for the right partner to work with and I'm lucky to have found a home with Black Lion Records. I'm excited to work with them and be able to deliver to the fans physical copies of the music once again. With their commitment to quality and the music I believe the new album will get the reach and distribution it deserves. I'm excited to join such an esteemed roster of artists on such a prestigious label".

News of Demonstealer's fourth album will be available soon.

Sahil Makhija, better known as Demonstealer, has long been one of the pillars of the heavy metal scene in India. From being at the vanguard of a fledgling metal scene to becoming one of its most visible and respected proponents today, Demonstealer is integral to the growth of the Indian metal community.

In 2000, Demonstealer formed Demonic Resurrection, one of India’s best-known and biggest metal bands. Over the last two decades the band has become one of the most recognizable faces of Indian metal, nationally and internationally. Also in 2000, he established India’s first recording studio dedicated solely to metal — a home to all of the country's top metal bands.

Aside from the success of Demonic Resurrection (5 studio albums, Metal Hammer Golden God award, multiple tours and festivals across the UK and Europe), Demonstealer’s solo career is notable. From his debut album And Chaos Will Reign (2008) to 2021’s The Holocene Termination, Sahil has been blazing a thunderous solo trail.