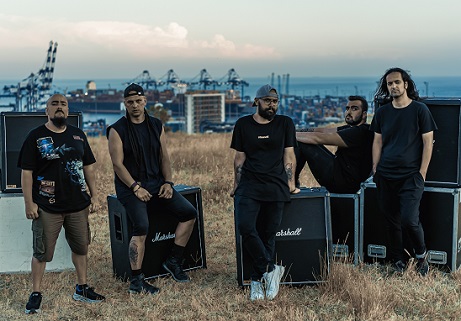 Out of Nowhere shows unity with Iranian women on “Wrong Generation” single.

Out of Nowhere has dropped the music video for “Wrong Generation,” the new single where the djent/metalcore five-piece demonstrates solidarity and cohesion with the women and protesters in Iran, the band members’ home country. Out of Nowhere members shifted to Turkey last year to pursue their dreams and music endeavors, but their defiance against the oppressive system of Iran has always been bold and open, and despite immigrating to a new country, the band members could not remain silent when the women and protesters in Iran are risking their lives for their freedom. The ongoing protest erupted upon the death of Mahsa Amini, who — for not wearing the hijab according to the government standards — was arrested by the Iranian religious morality police. Amini later died in a hospital in Tehran under suspicious circumstances in a Tehran hospital. According to media reports, eyewitnesses and co-detainees witnessed the police brutally torture and insult her, purportedly sowing the seeds of a cerebral hemorrhage or stroke that resulted in her death on 16 September 2022.

Formed in Mashad in 2010, Out of Nowhere has been one of the most active metal bands from Iran. Despite being from a country where metal is illegal and bands often get arrested for playing live or making music, Out of Nowhere never stopped releasing music or playing live in Iran regardless of the risk of being arrested by the oppressive regime.

Speaking of the track/video and the protest, Out of Nowhere offers:
“We dedicate this video to the women of Iran. To those who are fighting for their basic freedom and getting killed by the Government. These are our sisters, we lived there, and we feel people in our hearts. The young generation in Iran taught us how to be big and brave. They don’t want their youth and future ruined. We (Iranian People) are not from the violent generation. Everyone from everywhere has the right to have freedom, but we didn’t have even the basic ones. Also, we don’t have freedom of speech. Although we are young, most of our dreams were buried six feet deep because of the regime’s suppression, but we can’t stay silent when our brothers and sisters are getting killed every day in Iran.”