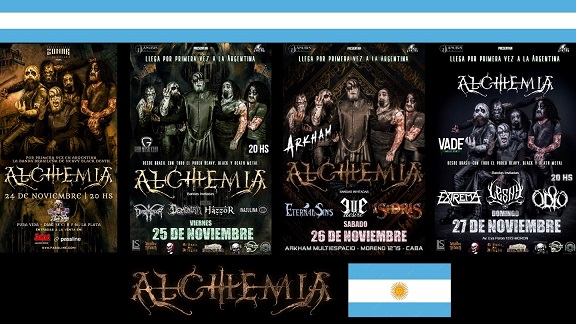 Alchemia will go on a tour for the first time in Argentina. Afterwards, the horror metal band will travel to Europe, where they will perform in Germany, Belgium, Netherlands, and Poland.

In anticipation of the European tour, the horror metal band Alchemia will tour Argentina for the first time, with four consecutive headline shows, where they will play the album “Inception” in full. “We are excited to be able to play in Argentina for the first time, which has always been a big goal for us. It is one of the main markets that we want to promote Alchemia, as it has an audience that is very dedicated to rock and heavy metal”, commented vocalist Victor Hugo Piiroja. “It will be a special tour, because as headliners we will have more presentation time. Thus, we decided to play the 'Inception' album in its entirety. We will record these shows on video and bring special merchandising to these events. It will be an incredible experience to prepare us for the first tour in Europe, where we will play in Germany, Belgium, Netherlands and Poland under supervision of On Fire Agency”, he added.

“Inception” was released in the Brazilian market by Shinigami Records and in Europe and Japan by the Italian label Wormholedeath. The material was recorded at Fusão e Carbonos studios, with production by Piiroja, in collaboration with Ricardo Campos (Sunseth Midnight), who produced the vocals. Mixing and mastering were handled by renowned Danish producer and audio engineer Tue Madsen.

The repertoire features dramatic symphonic elements and haunting gothic synthesizers, arranged, and expanded upon by British composer Jon Phipps, who has created virtual orchestrations for Moonspell, Amorphis, Angra and Dragonforce. “We have a lot of influences on 'Inception', from heavy metal, black metal, death metal, movie scores and classical orchestration. At the same time, it presents its own identity”, concluded Piiroja.