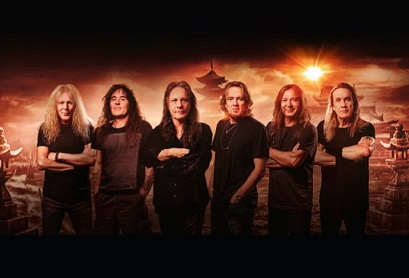 Iron Maiden have just released a live music video for the track "Stratego" off their latest album, "Senjutsu". The song was composed by guitarist Janick Gers and founding bassist Steve Harris.

The British heavy metal legends posted the following message: "The U.S. & Canadian leg of the 'Legacy Of The Beast' world tour is now underway! Here is 'Stratego (Live)' — dedicated to you, our incredible fans across the world!".

"Senjutsu" was recorded in 2019 in Paris, France, with longstanding producer Kevin Shirley and co-produced by Harris. For "Senjutsu" the band once again enlisted the services of Mark Wilkinson to create the spectacular Samurai-themed cover artwork, based on an idea by Harris.